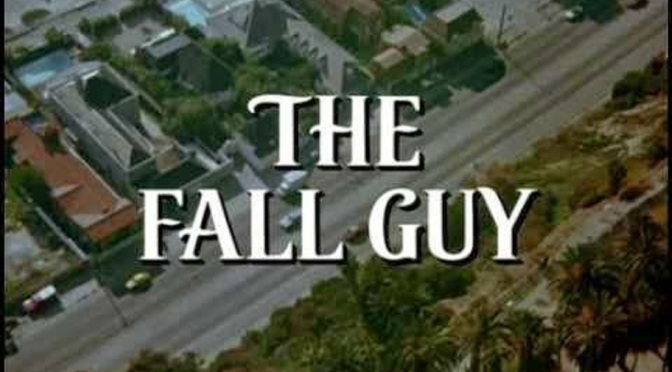 Well, I’m not the kind to kiss and tell,

But I’ve been seen with Farrah.

I’ve never been with anything less than a nine, so fine.

I’ve been on fire with Sally Field,

But somehow they just don’t end up as mine.

It’s a death-defyin’ life I lead,

I take my chances.

I die for a livin’ in the movies and TV.

Kiss some other guy while I’m bandagin’ my knee.

‘Cause I’m the unknown stuntman

That made Redford such a star.

It’s true I hire my body out for pay,

Blown up for Raquel Welch,

But when I wind up in the hay, it’s only hay,

Or Tarzan from a vine,

‘Cause I’m the unknown stuntman

That makes Eastwood look so fine.

Click to order The Fall Guy: The Complete First Season at Amazon.

With the two year anniversary of Burt Reynolds’ passing, it seemed like a good time to go revisit a TV show no doubt inspired by that former world box office champion: The Fall Guy.

Producer and creator Glen A. Larson’s The Fall Guy was the kind of series I used to call a “homework show.” If I needed background noise while I was studying, it perfectly served that purpose. You could pick up and follow the plots no matter how much you missed, and every five or ten minutes, something would blow up, or a good-looking girl (frequently that angel sent from heaven, Heather Thomas) would show up in some revealing get-up, giving you a nice break from that odious studying.

Now that may sound like a backhanded compliment, but I had nothing but good feelings about Lee Majors’ early-80s ratings hit back then. Watching it now (with no study breaks), I was more than pleasantly surprised at how much laid-back fun I had with this “high-concept” nonsense. “High-concept,” as I’m sure you know, was a much-maligned production guideline for movies and later television shows in the late 70s and early 80s (some attribute its inception to then-Paramount whiz-kid Michael Eisner). The key to “high concept” was that the entire movie or TV show could be summed up in one sentence―for all departments, including production, marketing―and especially the audience.

Now, one of the big problems with “high concept” projects (beside the general disdain that critics heaped upon the practice, charging the studios with a deliberate dumbing down of material for mass-produced hits), was actually delivering on that promise. If the concept was great, the movie or TV had better live up to that promise, or the essential emptiness of the procedure was painfully obvious to all involved, especially the viewers. Happily, The Fall Guy delivers exactly what it promises.

Coming out in 1981, when Burt Reynolds was the biggest box office star in the world, the empty, big-budget stunt movie was finally starting to come into its own as a genre, and The Fall Guy liberally borrowed from those theatrical successes such as Smokey and the Bandit and Hooper (as well as from Steve McQueen’s final film, The Hunter, from 1980), boiling them down to workable weekly TV episodes. This isn’t rocket science, kids. The Fall Guy, co-produced by Lee Majors, features standard, serviceable action/adventure scripts, with mysteries warmed over from a thousand other TV shows and movies you’ve seen before, jacked up by some pretty impressive, big screen-type stunts (sometimes cobbled from stock clips from big-screen movies and passed off as originals here), and served up by a cast clearly trying to have fun.

It’s directed and cut to move fast; it has a generous budget; and at no time do we linger on anything substantial or heavy in the ideas department. The Fall Guy is all light and fun, even if a serious sub-plot does try to muscle its way into the forefront. Since The Fall Guy manages to carry out its prime function, if you will―to simply entertain―and it does so adroitly, it’s not insulting to our intelligence.

And seriously, you have to give Lee Majors a big part of the credit for this show’s success (it was a big hit, landing 26th in the Nielsen’s for the year, and going even higher in later seasons). Majors, to his great credit, would be the first guy to admit that’s he not a Shakespearian actor. He is, though, a perfect TV actor, a personality that viewers like seeing popping up on their TV sets. It’s a cliche, but it’s true: TV audiences don’t want to watch actors on a regular basis whom they wouldn’t want in their living room (I guess that’s changed now, though…would you want Tony Soprano over for dinner?). And Majors projects precisely that kind of good-natured, self-effacing, handsome, middle-of-the-road, polite but manly image that women love, and guys instantly identify with and instinctively like (just as an indication of Majors’ self-deprecation, when commenting on his hit single of the theme song charting in Germany, Majors said, “I guess they don’t know good music there,”).

But putting aside likeability, he’s really good at this kind of stuff. Remember, prior to The Fall Guy, Majors had four successful TV series to his credit: The Big Valley, The Virginian, Owen Marshall: Counselor at Law, and The Six Million Dollar Man―a pretty neat trick for any actor, and a testament to his skill at performing for the little screen (unfortunately, his big screen career never took off. Believe me; I know: I paid full ticket price for The Norseman…). He knows how to play to the TV camera, and with a role like The Fall Guy‘s Colt Seavers, an amiable, rough-and-tumble stuntman/bounty hunter, Major’s physicality is perfectly in sync with his ingratiating mugging.

Majors’ double-takes may not rival Jack Benny’s for subtlety, but considering the sometimes over-the-top, cartoonish nature of The Fall Guy, they fit in quite well. And come on, give the guy major credit for singing one of TV’s most memorable theme songs (it’s been going through my head all week). Speaking of going through my head all week…Heather Thomas. If you can manage to see past her knock-out good looks and concentrate on her acting, you’ll find she’s quite good as spunky stuntwoman Jody who frequently helps out Colt with his cases. And as the more than slightly naive, good-natured younger cousin of Colt’s, Howie, Douglas Barr brings just the right, light touch. Only Jo Ann Pflug as “Big Jack” Jack, the bail bondsman who employs Colt, comes off as odd-woman-out in this team (I hated writing that, because I was crazy about her at one time).

Helping The Fall Guy stand out from other action series was a commitment to bringing large-scale stunts to TV viewers on a regular weekly basis. Each episode features a central sequence that highlights a big, fat, juicy gag that meshes hilariously with the obvious process shots feature Majors “falling” or “flying” or “swinging” or whatever else the expert stunt team dreamed up for that particular episode. Certainly that’s not Majors in most of those fight scenes, but that’s part of the fun with The Fall Guy. It’s make-believe; it’s fluff, and most importantly, it’s expertly executed.