2017 continues to be a terrible year for vintage TV lovers: talented comedian and singer Jim Nabors died today at the age of 87. In honor of this iconic performer, we here at Drunk TV look back at the first season of his beloved 1960s sitcom, Gomer Pyle.

On the last broadcast episode of the 1964 season of The Andy Griffith Show, gas station attendant Gomer Pyle (Jim Nabors) marches into Sheriff Andy Taylor’s (Andy Griffith) Mayberry office, singing the Marine Corps hymn, announcing that he has just signed up for active duty. Having co-starred on The Andy Griffith Show for only a year and a half, it was quite a coup for the multi-talented Nabors to be given his own starring vehicle. Originally intended for George Lindsay (who would go on to play Goober Pyle, Gomer’s nephew, on the Griffith show), the Gomer Pyle spin-off series was the idea of Aaron Rubin, a veteran of TV comedy. Rubin had worked as a writer for the classic military service comedy, The Phil Silvers Show, as well as being a producer, writer and story consultant for the enormously popular The Andy Griffith Show.

Along with Andy Griffith (who gets an “Associated with” credit at the end of each Gomer Pyle episode), Rubin’s premise took the bumbling, country yokel with the heart of gold, and stuck him into the toughest military outfit in the world, matching Pyle up with the meanest, loudest drill instructor they could find, Sergeant Vince Carter (Frank Sutton). A pilot was shot, featuring Sheriff Taylor taking Gomer to his induction, while helping Gomer through the first few hours of his boot camp. That fall, Gomer Pyle, U.S.M.C. premiered, and was an immediate smash hit with the viewers, ranking third overall in the Nielsen ratings for the 1964-1965 season, even beating out its original host series, The Andy Griffith Show (which believe me didn’t make ‘ol Andy happy at all…). During its five year prime-time run, Gomer Pyle, U.S.M.C. never left the Nielsen Top Ten.

It’s strange that Gomer Pyle, U.S.M.C. has never received the kind of sustained fan adoration/pop culture veneration–let alone critical scholarship–that’s been afforded its host series, The Andy Griffith Show. Equally popular with viewers, it has lasted for decades in syndication all over the world, just like The Andy Griffith Show (although admittedly, at not the same saturation level). It features one of that classic’s most popular reoccurring characters, supported by most of the creative talent that went into making The Andy Griffith Show a pop culture phenomenon. So why doesn’t anyone really talk about Gomer Pyle, U.S.M.C. anymore?

Perhaps it was the critics’ initial reaction to the character that dimmed its later appreciation. Certainly The Andy Griffith Show was well-liked by many reviewers and critics during its original broadcast run, but they didn’t think it was the masterpiece that everybody considers it now. And when Gomer Pyle, U.S.M.C. premiered, those same critics were even less kind. Something about the over-enthusiastic, slow-on-the-uptake Gomer going through the slapstick motions of Marine basic training, rubbed the urban, elitist critics the wrong way (when are they ever happy?), provoking a disdain for the show and the character that quickly made even the mere mention of the series’ name a punchline for comedians and talk show hosts who wanted a cheap laugh. Despite its enormous popular success, Gomer Pyle, U.S.M.C. was never nominated for an Emmy. 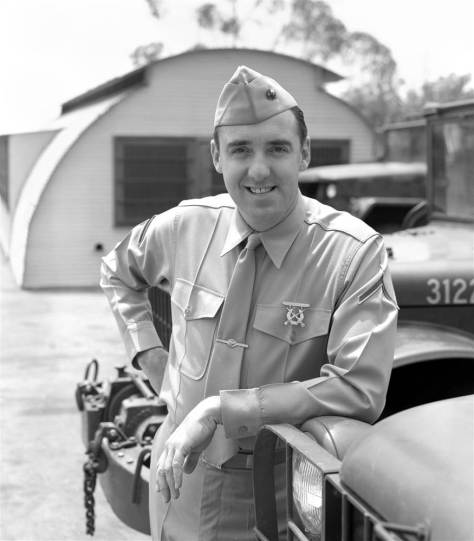 Viewed today, the first season of Gomer Pyle, U.S.M.C. comes off extremely well compared to its ignominious critical reputation. First and foremost, it accomplishes what it sets out to do–simply put: it’s funny. That may seem simplistic, but creating a comedy show that gets laughs fifty years later is quite an accomplishment, and it’s nothing to be taken lightly (have you watched an episode of Friends lately? Enough said…).

You have to hand it to Jim Nabors; he is hilarious as Gomer Pyle. Comedy of course is subjective; what strikes one person as amusing can cause teeth-grinding with another (Jerry Lewis would be the acid test for that theory…he’s a genius). So it’s difficult to bring somebody over from the “other side” if they don’t think something’s funny. Either you find Nabors funny as Gomer, or you don’t. I do. Enacting a character such as Gomer, a totally pure, naive, optimistic, good-hearted personality, who also happens to be a slow, “country bumpkin,” takes a complete commitment by the actor, a willingness to be 100% honest in his portrayal, while being “in the moment” and at one with the character, at all times on the screen. Otherwise, the character becomes a cartoon; we’ll never really believe in him as a whole person.

While critics then and now may suggest that’s precisely what Gomer is–a grotesque cartoon characterization, no doubt wrought from elitist critics’ disdain, then and now, for Southern characters–I’ve never found that to be true. Nabors is remarkably, naturally adept at making Gomer a believable human being, with faults and a range of emotions that result in quite an endearing, likeable character. Nabors (a truly humble guy) may have stated often that he wasn’t a great actor (he had never acted before taking on the role for Griffith), but perhaps what he should have said is that he wasn’t a well-rounded actor. He may not have been able to do Hamlet…but let’s see Richard Burton or Larry Olivier play Gomer Pyle. Creating a character such as Gomer Pyle, which people remember and still seek out fifty years later, is nothing to sneeze at for any actor, regardless of their pedigree.

Of course, you can’t have such a sweet character like Gomer in a show without a counterbalance, and Gomer Pyle, U.S.M.C. found a brilliant one in the guise of Frank Sutton’s Sergeant Vince Carter. A classically trained actor, Sutton is letter-perfect as the hot-headed Sgt. Carter. I can’t imagine a tougher assignment for an actor than Sutton’s basic responsibility in Gomer Pyle, U.S.M.C.: blow up at Pyle each and every time he screws up. But somehow in this first season, Sutton manages to bring a new spin to each of his patented explosion scenes, doing a slow burn better than just about anybody in the business. There’s something about the absolute insanity of his rage, the savage anger in his face and voice, that makes Sutton totally riveting (and quite hilarious) when he’s chewing out Pyle. Again, if that was all Sutton did, he’d be a cartoon, as well. But he manages to bring subtleties to the role, as well; all one has to do is watch his alert, bright eyes to see that this is a great actor listening, watching, and reacting to Nabors. He’s totally in the moment and in the character, just like Nabors. They’re a justifiably famous TV comedy team, with a chemistry together that is rare.

Certainly, Gomer Pyle, U.S.M.C. isn’t perfect. The premise, which is rather limited, probably hastened the decision to end the series after only five years (Nabors stated that he simply couldn’t pass up a chance to do a variety series that CBS offered him; he had tired of the Pyle role). After all, there’s not much you can do with Pyle and Carter when they’ve spent five years in training, with Carter yelling at Pyle for his umpteenth foul-up. As the series progressed, Carter became more of an overt friend to Gomer, while Gomer became much more competent in his duties. You can already see the progression the series would take here in the first season, when Carter, despite his hatred for Pyle’s disorganization, comes to realize that Pyle is a hard worker and a good soul.

Still, the shadow of Vietnam (which was ever-escalating during the show’s 1964-1969 run) necessitated CBS’s demand that Pyle never be deployed into action, less the realities of the world intruded on the fantasy land of Gomer’s and Carter’s Marine life. It’s a sad fact that many of the boys seen marching with Gomer in the opening title sequence were later killed in battle during the war (at least that’s the rumor, repeated by Nabors and Sutton over the years). Many critics disparagingly pointed out the show’s unwillingness to deal with the war, but honestly, what were the producers of the show supposed to do–turn Gomer Pyle, U.S.M.C. into a hard-hitting, fact-based docu-drama? The public was well aware of what was going on in Vietnam; they saw it every night on their national news. Perhaps Gomer Pyle, U.S.M.C. offered, just for a half hour every Friday night, a reassuring respite from the horrors of that all-too real war. Yes, it was a fantasy version of Marine life, but in its own way, justified, since Gomer never actually went off to war. Gomer Pyle, U.S.M.C. never claimed to be anything but an entertaining comedy, and at this, it expertly succeeds.

Gomer Pyle, U.S.M.C. never received the critical respect it deserved during its day. Perhaps Jim Nabors was too good portraying the “knuckle headed, goldbricking, goof-off” (Sgt. Carter’s words, not mine) country boy Pyle; perhaps critics thought he wasn’t really acting. Or maybe it was the fact that the show offered simple pleasures to loyal fans, executed by total professionals who didn’t care if the critics liked them or not. And loyal fans they were; in that neglected, often reviled “fly-over” country between New York and L.A., Jim Nabors was a TV superstar, and Gomer Pyle, U.S.M.C. quickly became a notable pop culture touchstone. Jim Nabors and Frank Sutton are an inspired comedy team, and their antics in the first season of Gomer Pyle, U.S.M.C. are quite entertaining to behold. R.I.P, Jim Nabors.