2019 marks the 42nd anniversary of the death of The King of Rock ‘n’ Roll: Elvis Presley. So it seemed like a good time to dig around in my vast subterranean DVD vault for some Elvis-related projects.

A few years ago, Starz Home Entertainment and Anchor Bay released the 2005 CBS miniseries Elvis: The Miniseries, a supposedly daring exploration of the King’s life, starring British sensation Jonathan Rhys Meyers as Elvis, Camryn Manheim as Elvis’ mother Gladys, and Randy Quaid as Elvis’ manager, Colonel Tom Parker. I caught Elvis: The Miniseries when it played during 2005’s May sweeps. There was quite a bit of network hype, and it received a slew of Emmy nominations (Meyers won a Golden Globe for his performance, but nobody brought home an Emmy), but I seem to remember that ratings, while respectable, weren’t socko.

Click to purchase Elvis: The Miniseries on DVD at Amazon.

I’m not sure where the whole Elvis cult is nowadays: are young viewers still drawn to the faux-Shakespearian tragedy of the young poor boy from the South springing forth from obscurity to invent rock ‘n’ roll, only to gradually deteriorate into self-parody and untimely, early death? Considering Elvis’ original fans are now in their seventies and eighties, where does his legacy stand now with younger consumers of music and movies (certainly in the last few years, the only P.C. concern that documentarians seem to feel is important is exploring the specious claim that Elvis somehow “ripped off” black culture)?

Directed by James Steven Sadwith from a script by Patrick Sheane Duncan, Elvis: The Miniseries is bracketed by Elvis’ famed 1968 TV comeback special, where Elvis (briefly) rid himself of the baggage that went with years and years of terrible movies and worse soundtrack releases, and showed the world exactly what made him the King of Rock ‘n’ Roll. Filled with self-doubt and wracked by the knowledge that the world had moved on, rendering him obsolete, the Elvis of 1968 flashes back to the beginnings of his rise to fame.

During its first half, Elvis: The Miniseries recreates Memphis in the early 1950s as Elvis struggles to find an identity for himself. Rejected in school for his wild clothes and pomaded, dyed hair, Elvis haunts the black churches and nightclubs, drawn to the raw blues beat that are unknown and forbidden to most of his white schoolmates. Desperately poor (his family was on relief), Elvis works as a truck driver, but dreams of being a singer at Sam Phillips’ (Tim Guinee) Sun Records recording studio. Making himself known by showing up day and night at the place, he’s eventually given the chance to record, and after a bolt of lightening inspiration by Phillips, who hears something totally new in music when Elvis starts “goofing around” on the blues classic, That’s All Right, Mama, rock ‘n’ roll is born.

Soon, Elvis is driving audiences of young women wild with his sexualized gyrations, creating a wellspring of attention that doesn’t go unnoticed by wily personal manager Colonel Tom Parker (Randy Quaid). Winning over Elvis with promises of million dollar pay-offs and Hollywood movie contracts (Elvis’s “secret dream”), the Colonel turns his attention to gaining Elvis’ parents’ agreement to break the boy’s contract with Sam Phillips. Vernon Presley (Robert Patrick) is agreeable, but Gladys Presley (Camryn Manheim) sees doom and gloom in every sign. Giving up Elvis to fate, she’s sure that only bad will come of his ultimate success.

Conquering the music charts and Hollywood, the bad press that the Colonel cultivated (there is no such thing as bad publicity) because he thought Elvis was a flash in the pan, starts to stymy the young singer. When a ridiculous request to draft Elvis in the Army comes (no Hollywood star in 1958 would have had to actually serve), the Colonel orchestrates Elvis’ acceptance, hoping to make his appeal more mainstream, and silence his critics. Once inducted and on his way to Germany, Elvis is sure his career is over.

The second half of Elvis: The Miniseries deals with the death of his mother, and his growing dependence on drugs, as well as his possibly career-threatening relationship with 14-year-old (some say she was actually 13) Priscilla Beaulieu (Antonia Bernath). Gaining the trust of her parents, Elvis dates the young girl, and even manages to arrange for her to be with him in Memphis and later California, all with her parents’ acquiescence.

Soon hooking her on the same pills he now uses to get through his hectic days, Elvis starts to spin out of control, as his film roles get sillier and sillier, and his soundtrack albums (his major source of recording in the 1960s) get worse and worse. Overcome with a desire to reclaim his spirituality through mid-Eastern religion (fostered by hairdresser Larry Geller, played by Rob Treveiler), Elvis initially bucks the Colonel’s increasingly strict control over his life, agreeing with TV director Steve Binder (Jack Noseworthy) that the Singer Sewing Machine TV Special may be his last chance at getting back his audience.

A lot is always made about any Elvis project that has the official cooperation of the Presley estate, including Elvis: The Miniseries, which benefited from original Elvis master recordings used for the first time in a TV biography of his life. Personally, anytime I see that the Presley estate is involved, I start looking for the whitewashing, and sure enough, it’s all over the place in Elvis: The Miniseries. While the makers of Elvis: The Miniseries would like you to think this is the most revealing portrait of Elvis and his life–and it probably is, up to 2005–that doesn’t mean it includes anything that Elvis fans haven’t known about for years.

Just because it shows Elvis calling the Colonel an illegal immigrant (he was a Dutch national here illegally in the country–that’s why Elvis never toured outside the United States), or shows Elvis taking drugs, or sleeping with Rose McGowan’s Ann-Margret, doesn’t mean Elvis: The Miniseries is particularly revelatory, especially since the stories are so old. Scenes of Elvis popping pills and giving them to an underage Cilla was old hat by 2005. 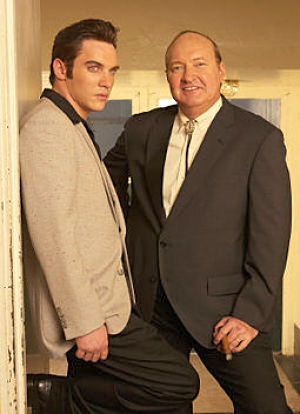 And heaven forbid an officially sanctioned bio of Elvis that touches on the really weird stuff. I don’t particularly want to see those segments of his life depicted…but if you’re going to tease an audience with an “Elvis they’ve never seen before,” you had better deliver. It’s not so much a question of explicitness, but Elvis taking drugs in real life, for example, was a whole lot uglier than what’s shown here. As for the whole Priscilla incident, that particular story has been romanticized right out of coherency. Where’s the condemnation for parents that, regardless of the stories told to them, would let a 13 or 14-year-old girl go with a 23-year-old man in the armed service…and then let her move in with him? The darker possible motives for such an arrangement (money has been suggested by some theorists) isn’t touched on.

That’s the main drawback of Elvis: The Miniseries: nothing of real substance is touched on. And no one seems to really want to poke around and give some answers to some long-asked questions. What exactly was the nature of Elvis’ obsession with his mother? What about his strained, strange relationship with his employee father, Vernon? What real control did the Colonel have over Elvis? What did Elvis get out of that bizarre artist/manager relationship? How about looking at the last ten years of his messy life, and try and find some answers there, instead of retreading the same myths and legends of the Memphis/Graceland/Hollywood periods that have been circulating for years? Ask away…because you won’t find those answers here in this “officially sanctioned” miniseries. Using Elvis’ real voice in the series evidently had its price.

As for the performers, only Randy Quaid really stands out in an amazing performance as the slightly sinister Colonel. Often shown in shadow, with a demonic coil of cigar smoke circling his head, Quaid’s subtle European accent, and beautifully modulated line delivery, has the viewer’s attention every time he speaks. He steals every scene he’s in. Meyers, adept at getting across the early dewy, slightly androgynous Elvis, starts to falter when it’s time to be the more macho, demanding, drugged out Elvis (although his voice work approximates Elvis well, his slight stature and build don’t really match). As for the lip synching, I’ve still yet to see a movie where it really works, and here, particularly in the final If I Can Dream segment from the Singer TV special, Meyers goes wildly off the vocal track, while appearing not to sing the song, but pitch a fit. It’s an embarrassing end to his performance.

The look of Elvis: The Miniseries is quite strong, with a convincing evocation of early Memphis that remains with the viewer throughout the set-bound second half. Still, Elvis: The Miniseries does manage to be moderately entertaining because the story of Elvis Presley remains so compelling. Elements of personal tragedy mixed up with the ultimate American Dream of movies, drugs, women, money, rock ‘n’ roll, and fame should intrigue new generations who wish to understand one of the most important pop culture icons of the 20th century. But if those same generations want a serious history lesson, they’d do well to take Elvis: The Miniseries with a big hunka hunka salt.

Late to the party, but if you didn't catch what's in the March HorrorPack (Blu-ray) slate, I just posted a video. Link in the description.
Some crazy, throwback Troma. 'Luther the Geek' (1988) was gross on VHS, & even grosser on @vinegarsyndrome's Blu-ray! But what's not gross? Stacy Haiduk. ❤ Great to see this splatterfest again all these years later, & in HD!
Adam Ant last night, Bowie tonight. 1983's 'The Hunger' looks like it was shot in 2021 on @warnerarchive's Blu-ray! Tony Scott's directorial debut - his next film would be 'Top Gun' in '86.
A little '80s MTV vibe with 'Spellcaster', starring Adam Ant & DJ Richard Blade. Usually listed as a 1988 release, it started filming in '86 but wasn't released until it premiered on cable in 1992 due to Charles Band's Empire Pictures going belly up. Fun, silly shizz from @vinegarsyndrome's limited Archive line.
I don't watch a ton of modern films, but I enjoyed the recent thriller 'Fatale' (2020, @lionsgate) - cuz I'm a sucker for a psychotic Hilary Swank.
Some wild, bizarre chills from @vinegarsyndrome with 'Satan's Blood', a 1978 Spanish thriller. Lots of good, eerie atmosphere & freaky shizz.