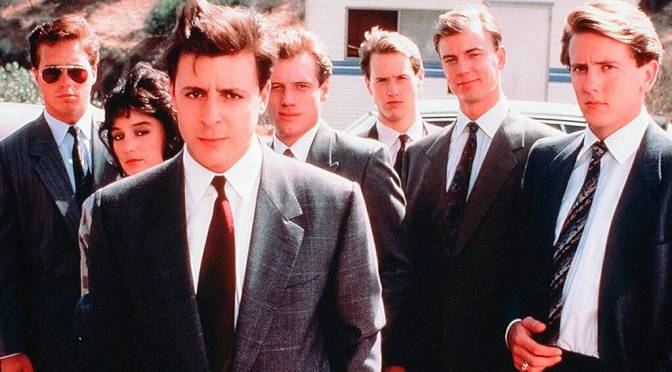 Commodities investor Joe Hunt (Judd Nelson) stands trial for the murder of businessman Ron Levin (Ron Silver). Told in flashback as various participants recount the events leading up and following the murders of Levin and another businessman, Billionaire Boys Club begins with Hunt’s recruitment of gullible brothers Eric and Chris Fairmount (Raphael Sbarge and Fredric Lehne) into the BBC. Sold as a commodities trading firm, the BBC appeals to the Fairmount brothers because of the lure of getting rich quick, of being in a firm with the “same kind of people” that they are (affluent young men from important L.A. families), and most importantly, because the charismatic Hunt has virtually mesmerized them into accepting his offer.

Hunt, who came from nowhere and managed to go to the same prep school as the Fairmounts on a scholarship, was routinely seen as a nerd by boys like the Fairmounts. Now, however, with his flashy clothes and utterly ruthless business protocol—along with an unnervingly successful line of b.s.—it’s Hunt who’s the pursued one by the sons of rich parents who want a fast buck without having to really work for it. Espousing a dubious “paradox thinking” philosophy, Hunt sells the boys on a business world where there are no absolutes, no black and white—only “shadings”—and those shadings are expendable if they get in the way of profits.

Hunt manages to get the young men to invest all of their inheritances into the firm (in reality, the BBC was really just a routine Ponzi scheme), and things look good for awhile. That is, until the commodities market begins to dry up, and Hunt loses his magic touch for investing. Not helping matters is the fact that a big whale Hunt is chasing—the notorious con man Ron Levin—has just used Hunt and the BBC to run a loan scam. Levin set up BBC with a $5 million portfolio to invest, which Hunt turned into a $14 million profit.

But when Hunt goes to collect his commission, a commission that would save BBC from insolvency, Hunt discovers that Levin has tricked him. The portfolio was a paper simulation; there was never any money in it. Levin used the BBC’s successful trading report to scam another bank into giving him a loan—Levin’s original purpose all along. This enrages the already spooky Hunt, who decides to take Levin out, but not before Levin signs over all his assets to him. What follows is an ever-increasing spiral into madness and horror as Hunt pursues his “paradox thinking” to the furthest limits.

I certainly remember the Hunt trial back in ’87 (it was a socko news item for months) and I recall the miniseries coming out, mostly because of the media stink when Hunt tried to have it squashed during his ongoing murder trial. I understand that it was previously released on VHS, but that it was a highly edited version, running only about 90 minutes. This DVD version runs 188 minutes (the DVD box misstates that it’s 200 minutes), but it plays like it’s half as long, because director Marvin J. Chomsky, working from Gy Waldron’s sprightly script, keeps things moving along at a rapid clip, detailing the horror along with the almost goofy lunacy of the improbable initial success of Joe Hunt’s enterprise.

Chomsky isn’t one of those directors you tend to actively seek out. However, with entertaining TV movies and miniseries on his resume like The F.B.I. Story: The FBI Versus Alvin Karpis, Public Enemy Number One, Brinks: The Great Robbery, Law and Order, Victory at Entebbe, Holocaust, Inside the Third Reich, as well as two of our favorites around the Drunk TV and Movies & Drinks headquarters—Mark Harmon’s The Deliberate Stranger and 1971’s Evel Knievel—Chomsky’s sudden appearance in a movie’s credits makes me sit up and take notice.

And as usual, he does a clean, crisp job with Billionaire Boys Club. Clearly, Chomsky is enjoying lampooning the perceived cultural phenomenon of the 80s: yuppies taking over the world while dressed in designer clothes and drinking Perrier. Hunt’s nakedly self-serving “paradox thinking,” along with his business credo of 1) never be sorry for anything you do, and 2) lying is okay as long as you know the truth and it helps the company, sounds like a primer for the myriad portraits of “yuppie scum” that were drawn in the media and the arts during that decade and beyond. Chomsky and screenwriter Waldron are careful to show the absolute moral vacuum that exists not only for the psychotic Hunt, but also for his followers.

Hunt’s con—really the basis for almost any scam or con that involves a naïve mark—rested on appealing not only to the vanity of these privileged sons of wealth, but more importantly, on offering the time-tested “something for nothing” greed quotient that has kept conmen busy since day one. Offering a shortcut to success, the megalomaniac Hunt (shown in front of a world map in one scene, discussing an “aristocracy of achievers” who would defeat mediocrity and rule the world), who importantly was an ostracized outsider to these boys only a few years prior, connects directly into these rich boys’ biggest dream—making money doing nothing—and worst nightmare: not living up to their parents’ success.

And what creeps they are, too. To Chomsky’s and Waldron’s credit, they spare no sympathy either for Hunt or the Fairmount brothers. Hunt, who could have easily been portrayed as a wounded, “morally equivalent” victim because of his school snubbing and relatively poor background (make him a minority, and he would be the hero in most movies today), is never seen sympathetically in Billionaire Boys Club. He’s a cold, calculating, blank cipher; an inhuman monster who apparently had no motivation other than to make money. Even the one scene he’s given, where he breaks down when he realizes his entire scheme may backfire, and that his group will look upon him with pity and derision, is void of compassion for the character. We just simply don’t believe him, nor do we care about his “pain,” particularly after considering his previous actions (credit a preternaturally intense Judd Nelson for bringing off this repellent character).

In their own way, the Fairmount brothers are worse. They go along with Hunt while the going’s good (along with the others, including murderer and eventual stool-pigeon Dean Karny, played with appropriate weakness by Brian McNamara), and once the first murder is committed, their dilemma is more a monetary than moral one. They’re more concerned about their jobs, and their investment in BBC, and more importantly, on “getting one up” on Hunt (whom they’ve come to despise), than for feeling sorry or guilty that a human being was senselessly murdered for profit. It doesn’t matter that the first victim was also a conman who really stuck it to Hunt and broke it off; the second murder (of one of the boys’ rich father) just confirms that anybody, regardless of personal responsibility or even connection with Hunt and the BBC, was fodder for murder amid Hunt’s personality cult of “money first, feelings second.”

When the Fairmount brothers finally tell the cops about what happened, they’re relieved that the burden is now off their shoulders. They hold no guilty feelings about their part in the crimes; they only want to see Hunt “get his,” rather than see justice served for the murder victim. Indeed, Chomsky shows the brothers playfully returning back to their normal lives (they even make a prank phone call to BBC when they hear Hunt has been arrested—these are sick children) as if their participation in a company that murdered two people was nothing more than a bump in the road of their inevitably successful careers. Their behavior is, on a smaller scale, just as repulsive as Hunt’s.

Chomsky also pulls off the neat trick of making Billionaire Boys Club both genuinely creepy and funny. While Chomsky doesn’t stint on showing the horrific murder of Masud Nabodi’s father by suffocation in a trunk (a sickening scene that goes on and on, almost to the breaking point, reminding me in some way of Hitchcock’s “potato truck” scene in Frenzy), he also has plenty of time in the miniseries format to get in some digs at ’80s filmmaking techniques, as well, shooting several montage sequences in the short, choppy, MTV-influenced editing patterns that were all the rage back then, and which humorously comment back on the cultural aspirations of the characters (I love how he has the boys arriving in their daddy’s cars, pulling into their parking slots like fugitives from a Busby Berkeley musical).

But Chomsky is always careful not to indulge in “excess for excess’ sake” foolishness, refusing to present a lot of Dynasty-like splurges of showy production values to titillate an envious audience. And there’s no DeMille reveling in decadence prior to a judgment and punishment. You’re never made to envy or desire what the “Billionaire Boys Club” had; they’re foolish cretins (and some were murderers and accessories after the fact) for which Chomsky and Waldron have obvious disdain and contempt. And rightfully so. How refreshing.

It's been a while. Had fun re-watching THE GOONIES for the first time in a long time. First time for me in HD after upgrading my old DVD to a Blu.
Since I never watched (& just purchased) the made-for-Sci-Fi Channel sequels, I revisited 1995's SPECIES. Fun times! Michael Madsen in top 90s tough-guy form; Marg Helgenberger scientifically testing crime scene materials 5 years before doing it on CSI; Alfred Molina a decade before he was Doc Ock; 15-year-old Michelle Williams, 3 years before Dawson's Creek; Forest Whitaker (cuz he was in EVERYthing); & Ben Kingsley as Xavier, the leader of this ragged X-Men-style group. But me & the college roomies were 19 at the time I originally saw this. Would we have been as interested if newcomer Natasha Henstridge wasn't the main attraction? 😳 One of my oldest Blu-rays, this is a 2006 pressing from Sony. Still fun to watch.
#OTD in 1953, Portland Wrestling premiered on TV. I stumbled across a DVD recently, PORTLAND WRESTLING SERIES VOL. 1, which featured some childhood faves, mainly Roddy Piper, Billy Jack Haynes & Rip Oliver. Check out my review at DrunkTV.net!
Bruce Willis, Problem Child, Van Damme, Sonic - a look at new & upcoming physical media releases from @MillCreekEnt! Link to watch in description.
Subtitles, axe murders, idiot 80s teens: some thoughts on 1989's GRAVE ROBBERS (Ladrones De Tumbas), released on Blu-ray by @vinegarsyndome. (Video link in description)
My @classicpopmag subscriber copy arrived today. Have you listened to the new @garynuman album?