Sad news: funny actor Bill Daily passed away this week. Pulling the rare trick of appearing in two iconic TV comedies–I Dream of Jeannie and The Bob Newhart Show–Daily was one of those actors lovers of vintage television took to their hearts like a cherished friend. He’ll be missed. So…in that spirit, let’s look at one of his lamer outings: I Dream of Jeannie…Fifteen Years Later.

Click to purchase I Dream of Jeannie…Fifteen Years Later at Amazon. 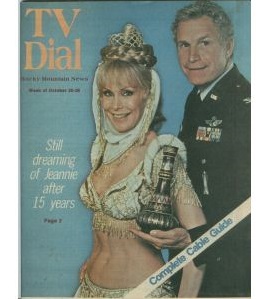 When evil sister Jeannie II (Eden again) pops up to ensure that not only will Colonel Nelson indeed fly the mission, but fly it with attractive female astronaut, Nelly Hunt (Lee Taylor-Allan), Jeannie pops her bottle cork and leaves Tony, taking T.J. with her to start a new life as a separated, liberated genie. Jeannie II isn’t finished yet; she arranges for Jeannie to land a job with handsome sporting goods store owner Wes Morrison (John Bennett Perry), hoping the two of them will hit it off so Jeannie II can have what she’s always wanted: Tony Nelson. Life without Tony is difficult, though, for love-struck Jeannie, and she longs to get back with Tony. However, cruel fate in the form of a speeding meteoroid headed towards Tony’s disabled Space Shuttle forces Jeannie to make a terrible choice: Tony’s life, or a life with Tony.

It usually takes about 20 years or so in our increasingly self-consuming pop culture for a time period or decade to magically convert into “nostalgia”…a time frame that often just happens to coincide with a period in adults’ lives when merchandisers and manufacturers and television and music programmers decide it’s time for those adults to spend even more money trying to recapture a bit of their youth. The 50s were hip in the 70s (Happy Days, American Graffiti), the 60s were hip in the 80s (all those boomer sitcoms generating huge ratings on TVLand and Nick at Nite); the 70s were hip in the 90s (everything Tarantino ripped off and called “art”), and so on. 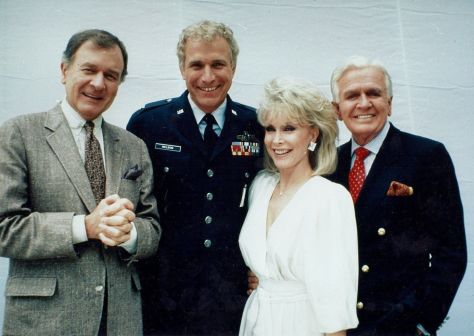 Reunion movies in early cable TV days were especially popular choices for the networks, particularly during the all-important “sweeps” periods. Taking a gander at the longest-running and most popular syndicated series in their production vaults, the networks would then try and gather together as many of the stars of these former prime time hits as were still living, and shoe-horn them into these “Gee, are they still alive?” reunion movies that pre-internet audiences checked out with macabre glee.

I Dream of Jeannie…Fifteen Years Later wasn’t the only reunion telemovie in 1985; Gidget’s Summer Reunion (no Sally Field), Peyton Place: The Next Generation (no Mia Farrow or Ryan O’Neal), and even The Dirty Dozen: The Next Mission (no Charles Bronson) all popped up that year. To be honest, I couldn’t place any of them now, but I’m sure I watched all of them, including I Dream of Jeannie…Fifteen Years Later. The original I Dream of Jeannie, bright and bouncy and fun, was always a solid, go-to sitcom to catch on cable or in syndication whenever something newer and better wasn’t on, so the thought of seeing still-luscious Barbara Eden again in her genie costume was reason enough to tune in–as others obviously did, considering its more-than-respectable Nielsen ratings in ’85 (NBC even repeated it later in the spring that year).

Seeing this now “for the first time,” it’s hard not to want to give it a pass at the lowest set of expectations, just because it doesn’t screw up as badly as it might have (some praise, huh?). Sure it’s completely off-putting to see Wayne Rogers step in for Larry Hagman; Hagman’s adept handling of the physical comedy in the original, along with his on-screen chemistry with Eden, was a huge reason the show is still running on channels all over the world. Take him out of the equation, and you just don’t have I Dream of Jeannie. Still…the talented Wayne Rogers is the personification of easy-going charm, so who wants to hate him for just doing a job (apparently he’s good friends with Eden, and took the role as a favor to her)? As well, he’s not on screen that much, anyway, since the writers were looking for a way to set the stage for Jeannie to be a single mom in the new sitcom (a reality since Hagman, still hot on Dallas at the time, would never go back to a role he claimed so often to hate). 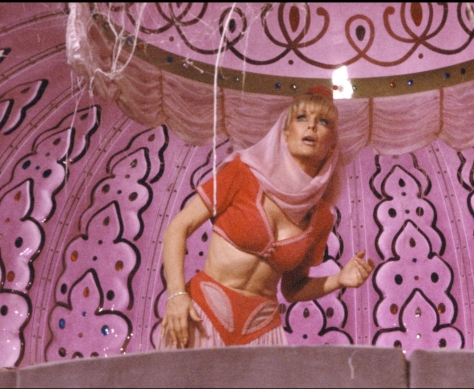 And no, I don’t like seeing Jeannie as a “liberated woman,”–not because I’m a sexist pig (what’s wrong with being sexy?)–but because that’s not her character. She’s a genie, for chrissakes. They’re supposed to have a “master.” I didn’t write the fairytales. Making Jeannie a liberated, “today” kind of woman is just a sop to what the veteran TV writer Irma Kalish (tons of television outings, from Gidget to Maude) probably thought would be “relevant” to women tuning into this in 1985. Wrong. What these helpful updaters never understand, what with the constant string of failed remakes and transformations over the past few decades of beloved, iconic TV series having proved, is that viewers want that ‘ol repeatable, identifiable experience again–they don’t want anything about their favorite TV show to change.

Why the hell else do they still tune into a 40 or 50 or even 60 year old show time and again? It’s a way of fooling ourselves for 30 minutes or so that we’re not getting any older, or even better…that we’re not going to die (isn’t this review fun?). So why would I want to be reminded that times have changed for Jeannie and Tony? I mean…who the hell cares? When I tune into I Dream of Jeannie…Fifteen Years Later, I just want to see if everyone is still alive, and how good Eden’s body looks (in a word for the-then 53-year-old: yessir). If the makers of I Dream of Jeannie…Fifteen Years Later had cut the Cosmopolitan bullshit and put Jeannie right back into her subservient-but-subversive ways, and figured out some clever, amusing situations for her to get her own way (like she always did anyhow), then they might have done some justice to the original series (the original Jeannie never needed woman’s lib to get what she wanted: she just drove poor Tony batshit crazy until she got her way…like all real women do).

Still…I do like to see Eden, a far more skilled comedic performer than she was ever given credit for, return here and recreate a little bit of the laughs she used to generate so effortlessly when she was the original Jeannie, bouncing around, laughing, giggling, and having delicious little snits–precious few of which, unfortunately, are on display here. And it’s fun to see Bill Daily act a little bit like the old Roger Healey, bumbling with expert timing, whether he’s rescuing a drunken Jeannie from a restaurant (the only scene in this reunion movie that really felt like the old series) or hitting on familiar face, Dori Brenner. And I adored seeing the marvelous Hayden Rorke, in his final TV appearance just two years before he died, expertly channeling the Dr. Bellows of old, while getting the movie’s biggest laugh (when a tipsy Jeannie sneezes and makes a whole restaurant full of people naked, Rorke appears, smiles bemusedly, and offers gamely, “When in Rome…” as he starts to strip off). 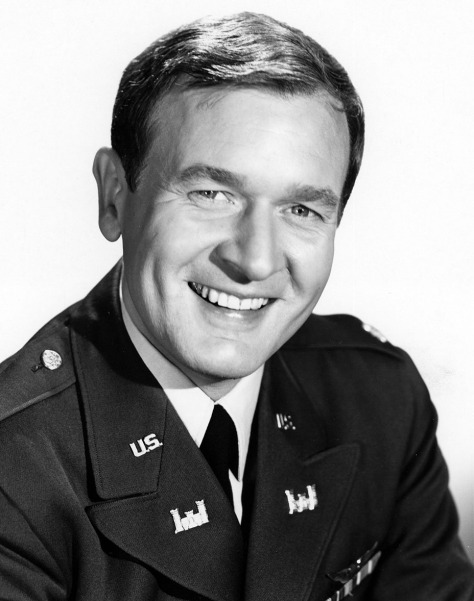 If the rest of I Dream of Jeannie…Fifteen Years Later, directed with bland competency by William Asher (how great is the irony here, with Bewitched co-creator Asher helming a reunion movie for that beloved sitcom’s arch rival?), is lame and too obviously set up as a launching pad for an unwanted sitcom update, well…what did you expect this would be? Private Lives or The Importance of Being Earnest? It’s enough that Eden looks happy and, um…real healthy in that genie costume, and it’s all over before you know it.