When Daryl Dragon, the keyboards half of the smash pop recording duo, Captain & Tennille, passed away on January 2, 2019, we decided to take a look back at one of the group’s popular ABC TV specials: Captain & Tennille in New Orleans, which originally aired April 3rd, 1978.

Captain & Tennille occupied that sunny, briefly light and happy moment in music history back in the early to mid-70s, where soft rock and puffy pop ruled the AM radio airwaves. Groups like The Osmonds and The Carpenters routinely outsold the more “respectable” hard-rock groups (my favorite story from that period is how David Bowie begged David Cassidy to work on one of his albums), while the variety of AM radio’s “Top Forty” playlist allowed an incredibly diverse mixture of sound to crossover to a wide audience.

Click to purchase Captain & Tennille in New Orleans on DVD at Amazon.

When Captain & Tennille‘s “Love Will Keep Us Together” hit in the spring and summer of 1975 (it was that year’s best selling single), it was instantly the most recognizable “sound” of that year. Anybody growing up during that period is immediately taken back to that time, whenever its insanely catchy synth-pop hooks come over the oldies stations. 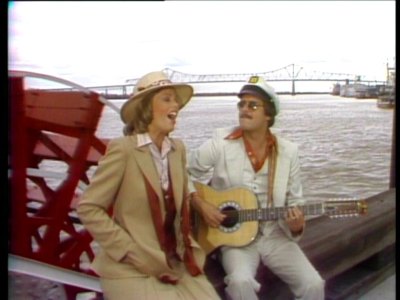 In 1976, as the duo kept knocking out the wax hits, the TV networks eventually came calling. ABC’s Fred “The Man with the Golden Gut” Silverman, always looking for a cheap “fad” show to produce, thought that Captain & Tennille could be the next Sonny and Cher. Shoehorned into The Captain and Tennille’s sketch-heavy comedy/variety format, Daryl Dragon and Toni Tennille proved popular enough with television audiences that 1976 fall season—even against heavyweight Monday night competition like Rhoda and Little House on the Prairie—to merit ABC ordering another season of their series. 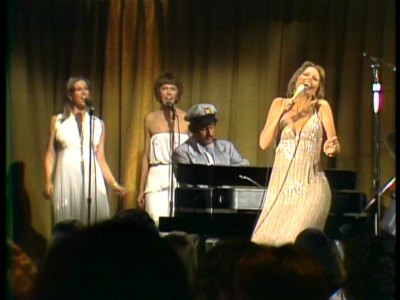 However—and most unlikely at the time—the duo asked out of their TV contract after only one season, citing the derivative nature of their series’ format as reasons for being unhappy with the final product (that, and the overwhelming amount of work that Daryl Dragon, the series’ musical director as well as co-star, handled). Silverman agreed, but only if the performers would headline three TV specials to be aired over the next two years: Captain & Tennille in Hawaii, Captain & Tennille Songbook, and Captain & Tennille in New Orleans.

Full disclosure: I was never an outright “fan” of the duo. I didn’t buy their records (the perception at the time was that they were a “girl’s group”), and I certainly didn’t have their lunch box or wear one of their T-shirts to school (I enjoyed having all of my teeth intact). However, part of the fun of “Top Forty” AM radio back then was hearing something that wasn’t considered “cool”…and secretly liking it. The duo’s reputation may have prompted snickers from the critics, but I can assure you that Captain & Tennille had the last laugh…all the way to the bank as they sold about 25 million albums, with numerous gold records to their credit.

And I can’t say I watched their TV show, either, on a regular basis (I was more of a Rhoda/Phyllis viewer). I didn’t like The Captain and Tennille probably for the same reasons the duo were unhappy with the series. It just wasn’t particularly funny (that overused shtick with the Captain’s taciturn manner and always wearing his captain’s hat, wore thin almost immediately). The “Big Three” networks at the time were still trying to fit contemporary 1970s acts into musical/comedy variety formats that had remained unchanged for twenty years. 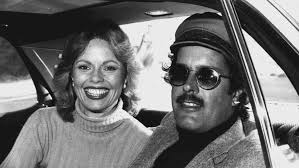 It was just a bad fit for the two; their music should have been the center of the series, not their “comedy,” through the network’s insistence on making them the next Sonny and Cher (or Perry Como for that matter, considering how dated the format was). However, it’s important to note that even though The Captain and Tennille didn’t chart in the Nielsen Top Thirty for the 1976-1977 season, it was still pulling in about thirty million viewers on average—staggering numbers that today would make the duo’s series the most watched show on television.

The three TV specials that Captain & Tennille agreed to in exchange for release from their series illustrate that transition the singing duo clearly wanted, but didn’t get, from ABC. Brief comedy sketches are still included in Captain and Tennille in New Orleans and Captain and Tennille in Hawaii, but they’re entirely absent from Captain and Tennille Songbook—and that exclusion is most welcome. When these specials concentrate on the musical talents of the pair, it’s quite a surprising and exhilarating experience for the uninitiated like myself.

I didn’t know anything about their music other than their hit singles like “Love Will Keep Us Together,” “Do That To Me One More Time,” “You Never Done it Like That,” and the god-awful “Muskrat Love.” But after watching Captain and Tennille in New Orleans, I was really kind of blown away by the range of these two performers. I knew Daryl Dragon was a wizard at the keyboards, but when he jams with Fats Domino (whom Dragon refers to as a personal inspiration) on “I’m Ready,” it’s clear that Domino is impressed with Dragon’s skills.

As for Toni Tennille, she has got some set of pipes on her. Whether crooning way down low on “Can’t Help Lovin’ That Man of Mine” or belting out “Dr. Jazz” with Barney Miller’s Hal Linden and Murphy Campo and the Jazz Saints, or moving it real nice to “You Never Done it Like That,” Toni Tennille immediately impresses with her beautifully controlled tone, nicely phrased vocals and of course, her knockout good looks. If you only know this duo from their Top 40 hits, as I did, Captain and Tennille in New Orleans is really a revelation.

Of course, there are sops to network demands in Captain and Tennille in New Orleans, including a totally ineffectual turn by comedian John Byner, and a surprisingly jamming Hal Linden, who blows a mean clarinet, let me tell you (his romantic rendering of “The Goodbye Girl” is fine for Broadway or for a cabaret show, but it seems incongruous here amid all the Dixieland and low-down jazz). The comedy skits, if they can be called that (a period-flavored card game between Byner, Linden and Dragon, and a funeral for Dragon’s hat), are lame beyond belief, but entirely keeping with the level of humor expected in such network outings at the time. Unfortunately, it was precisely these kinds of skits that contributed to the duo opting out of their network series in the first place, and they only serve to interrupt the great musical sets here on Captain and Tennille in New Orleans.

A little unboxing of a sealed 1983 Galaxian cartridge for the Atari 2600. I purchased it 15-20 years ago on Ebay. Link to video in description.
Took in a little artificial revenge with STEEL AND LACE (1991), video store-era fun released on Blu-ray by @vinegarsyndrome.
I legit chuckled my way thru 1989's THE LAUGHING DEAD - as it should be! Another nice Blu-ray restoration from @vinegarsyndrome. I talk about it in my video (link in bio).
A lil Chuck Norris in my most recent video (link in bio). BREAKER! BREAKER! (1977) is a fun ride through the rural, truck-drivin', CB-talkin' late 70s!
Watched THE SLAYER (1982) & enjoyed the ambiguous ghost story vibes mixed w/slashery feels. Released by @arrowvideo. Link in bio to my video review.
Had fun with the @arrowvideo Shocktober sale this year, & picked up more Blu-rays than anticipated. But I filled in a lot of missing gaps! Video link to the unboxing in description.