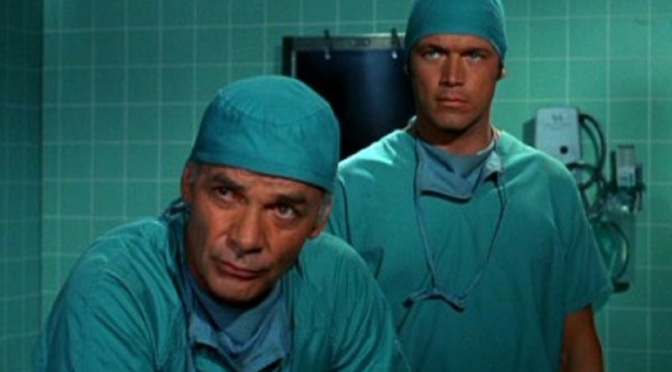 Dreamy Dr. Joe Gannon can crack my chest open anytime. In fact, he already did…when he first flashed those cold, cold baby blues at me….

With the holidays over and imminent signs of mortality creeping in due to overindulgence in drink and food, along with the Great American Midwest finally snowed in this winter, my hypochondria and cabin fever have joined forces to send me back, back to my DVD archives for a dose of Medical Center, CBS’s popular 1970s medical drama. Starring heartthrobs Chad Everett and James Daley (my granny would get the vapors whenever silver fox Daley adjusted his stethoscope), Medical Center is a perfect example of a late “golden age” network “A-list” series: beautifully written, expertly performed, and produced like a mini-big screen movie, week after week, without fail. Let’s look at the first season of Medical Center, which is available through Warner Bros.’ Archive Collection (you know them: they banned me off their FB page after I helped sell thousands of discs for them with my reviews).

Los Angeles, California, 1969 B.O.C. (Before ObamaCare). At the state-of-the-art Medical Center, strapping, square-jawed, 100% insured-against-malpractice Dr. Joe Gannon (Chad Everett) strides through the pea green soup-colored halls like an Olympic god, dispensing pity bromides and lightning-fast scalpel incisions with eerie aplomb. In Room 447, there’s a racist who doesn’t like his black doctor. In Room 443, there’s a blind girl whose hippie boyfriend cracked up his motorcycle. In Room 441, there’s a U.N. Ambassador whose heart is about to vapor lock. And calmly, calmly, Dr. Joe moves from one room to the other, working slowly and carefully through his diagnosis before whipping out a number 10 Dermatome and striking like a cat, much to the consternation of flibbertigibbet parents, joy-boy scalpel jockeys, and administrators who don’t know their catheters from their elbows. 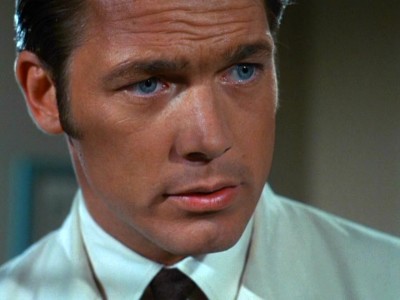 Usually offering backup to Dr. Groovy is Chief of Staff Dr. Paul Lochner (James Daly), who knows Dr. Joe is the best surgeon around, who knows Dr. Joe is almost always right…and who knows Dr. Joe is certainly the best-dressed cat on his staff. That doesn’t mean they don’t scrap and spark a little over procedure, or over diagnoses; however, their relationship is basically sound: Dr. Joe gets the sighs from adoring female patients, and Dr. Paul has board meetings and drinks a lot of coffee. Into these halls come the sick, the broken, and the dying, and they leave…healed. 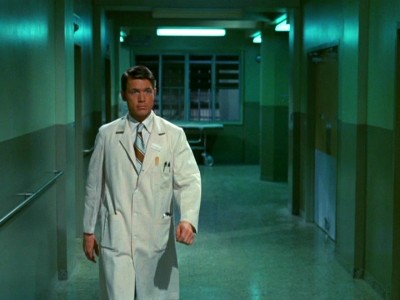 A never-miss favorite of mine when I was a kid, I chiefly remember two things from Medical Center: first, I wanted to be Chad Everett (he’s…he’s perfect), and second, goddammit if I wasn’t always palpitating suspicious lumps I imagined all over my body, because everyone seemed to come into Medical Center with a suspicious lump and sure enough, they wound up with some kind of tumor. Shows like Medical Center scared the beejezzus out of me as a kid, and no doubt helped turn me into the hypochondriac I am today. 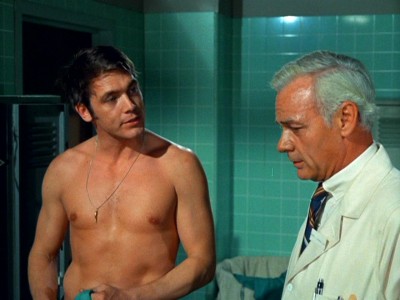 Watching Medical Center today, I was impressed with the measured seriousness of the piece, and the episodes’ consistent resistance to “ham up” the dramatics. Despite “new critics” (blech) claims that all TV prior to their own critical awakenings was hokey (milennials are consistently the most hilarious group of people, really), Medical Center is remarkably straight-faced (for 1969) when it talks about sensitive medical subjects like abortion or V.D., achieving an admirable semi-documentary feel for the actual process the doctors go through to reach a diagnosis, followed by lengthy treatment (or at least as lengthy and “semi-documentary” as you can get in a big, expensive, glossy 50-minute network drama). 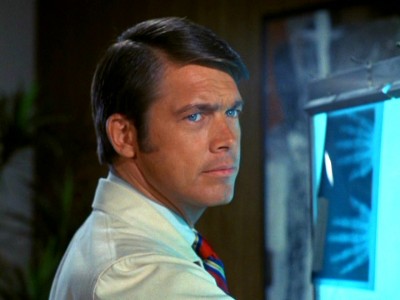 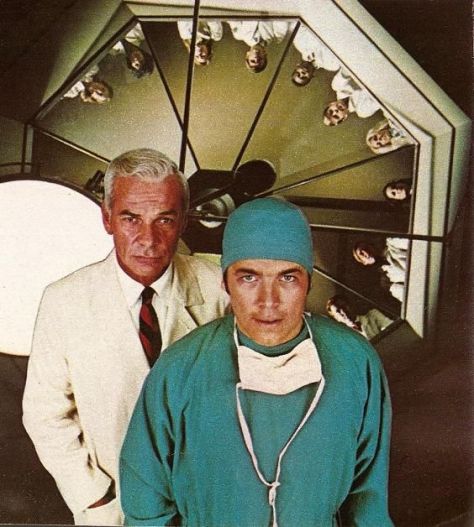 Now, I must admit at this point that I was curious to see what others thought about Medical Center (I was enjoying it too much. I distrust my own joy). So, I had my wife watch some of it with me (she’s notoriously snide about a lot of things). After only one episode, she flatly stated she’d gladly get hit by a crosstown bus if Chad Everett would do the stitching, so…out she went. Instead, I scanned the net to see if I could find any contemporary reviews of the series. 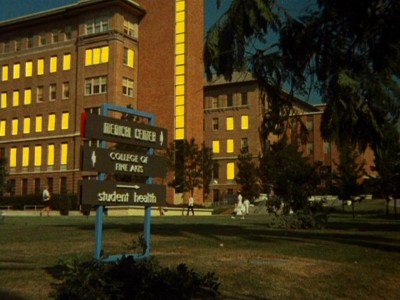 I won’t mention any names (they’re archived now…probably because they beat that hokey legal gimmick to death), but what I found was about what I expected: polite condescension mired in misreading. Singling out a 40+ year-old show for perceived errors in societal mores is always amusing (what you think is “correct” today, they’ll be laughing at 40 years from now, too), while bemoaning the millennia-old dramatic construct of actually having a final act conflict before a resolution (how novel!), was funnier still. As for this dire site’s critic running down the pacing of Medical Center, that seems to miss the point of the show entirely…while also not understanding the fundamental appeal of vintage dramatic television. 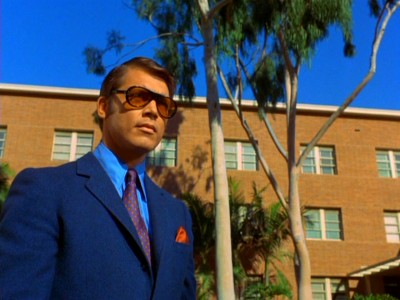 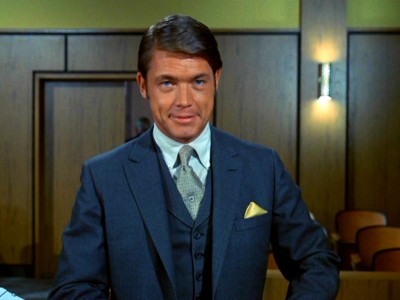 Granted, vintage television appears “slower” to today’s viewers, whose attention spans demand entire scenes lasting no longer than 30 seconds. However, Medical Center‘s focus on the entire procedure of examining, diagnosing and treating a patient shows a willingness to involve the viewer in a lengthy process that produces the very drama inherent in those patients’ illnesses, as well as the conflict that erupts from Dr. Joe’s meticulous procedural methodology. 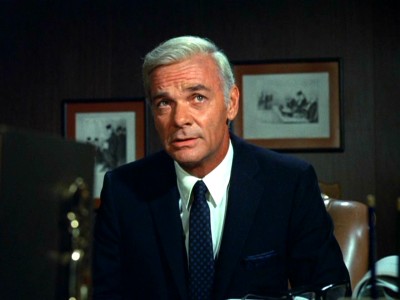 By 1969, the networks were fully aware that times were changing…even if they weren’t going to go the route of motion pictures and abandon their strict code of self-censorship. So Medical Center wasn’t afraid to push the limits when it came to subject matter (after all, it had to bring something new to its standard Dr. Kildare formula). But it did so in a calm, even-handed, “safe” manner that wouldn’t offend the broad audience that tuned in. For example, Vietnam is referenced several times in episodes (The Battle of Lily Wu specifically addresses it with a story about a returning Vietnamese refugee); one brief mention of the social turmoil roiling the nation comes up (in Jeopardy, Joe answers, “Motive for violence? Lately, that’s become as American as apple pie.”), as well as then-trendy generational misunderstandings highlighted, too. 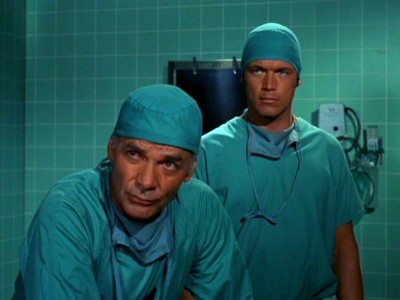 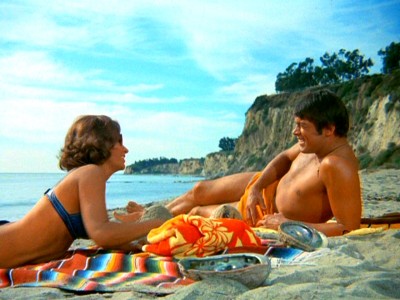 Pretty much everything is on the table here, including race relations (if you haven’t seen vintage TV in awhile, you’ll be taken aback at how casually the words “n*gger” and “honky” were thrown around then), abortion, drug addiction, and unmarried pregnancy. And the feelings expressed here by Dr. Joe and his patients don’t seem any different than what people are saying today. In The Deceived, Pat Hingle (excellent as always) gives a moving speech to his uncaring hippie daughter about patriotism and his chasing a buck after the Depression and WWII (evils suitable for crucifixion to some hippie teens back in 1969…and too many American socialist creeps today), while old pro Walter Pigeon has an equally touching speech in The Fallen Image, where he talks about getting older, and losing one’s courage and drive. In A Life is Waiting, Dr. Joe laments the callous way his students dismiss an unborn life, putting Barbara Rush’s dilemma over a therapeutic abortion as not one involving religion, but simply, life. And in The Crooked Circle, when whining junkie Tim Considine starts sniveling about the pressures in his life, Dr. Joe, who grew up poor and scratched to get anything he had, calls bullsh*t on the whole “victim of heredity/environment” nonsense: “Whatever happened to guts and self-reliance and responsibility?” he thunders. If you sensed that uniquely American combination of traits waning all the way back in 1969, Dr. Joe, be glad you ain’t around today…. 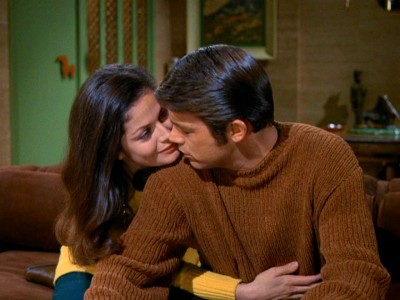 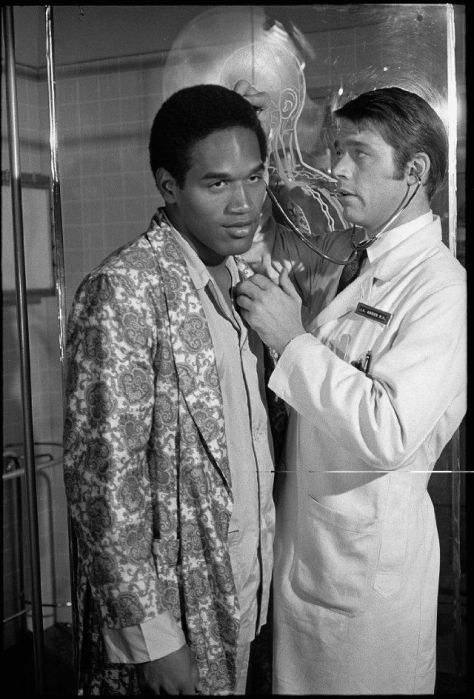 Those looking for lighter moments in Medical Center‘s will delight in O.J. Simpson, in The Last Ten Yards, telling his wife, Miss Jane Pitman, “I’ll kill you!“―just like he did to Nicole and Ron Goldman during their last night on earth (fair’s fair: Simpson is actually low-key good here in a role tailor-made for him). Rabid fans of Dragnet‘s “Blue Boy” will enjoy seeing him date future CBS Saturday morning superstar, Isis (lucky bastard), while those who only have eyes for Chad will wilt at the sight of him in his safari jacket (turtleneck and eye color match, natch), or watching him visiting the hippies with a daisy in his hand, or hearing him admitting he owns a Donovan record (he knows Donovan’s last name, just to prove it), or listening to him telling a young patient, “A lot of groovy vitamins going into your veins,” as he adjusts the I.V. drip, or simply watching him falling in love…with a dying woman. 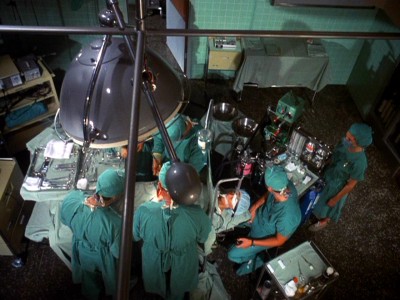 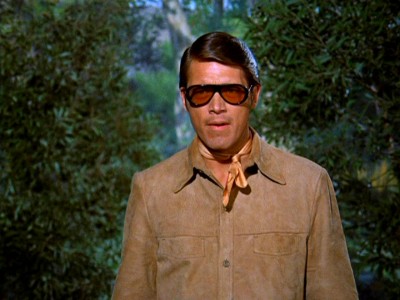 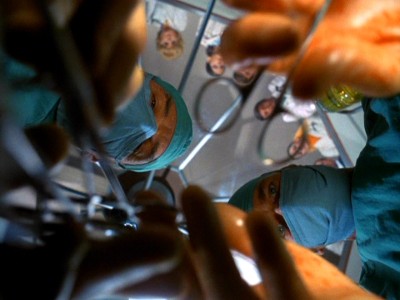 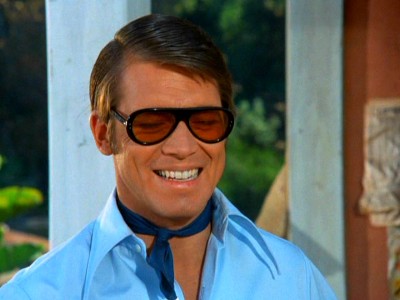 CBS wasn’t screwing around when it came to slotting Medical Center in its fall 1969 schedule: they sandwiched it inbetween a group of up-and-comers and proven veterans. Settled in the sweet spot at 9:00pm on Wednesday nights, Medical Center‘s lead-off at 8:00pm was The Glen Campbell Goodtime Hour (the smash mid-season replacement series from January, 1969 that rocketed to 15th for that 1968-1969 season), once-king The Beverly Hillbillies (which would chart for the last time with a still-impressive 18th for this 1969-1970 season). Medical Center‘s lead-out was Hawaii Five-O in its sophomore season, benefiting from the schedule move, where it would chart an impressive 19th for the year. A solid night of family viewing (can that be said anymore for network TV? No, it cannot). With no real direct competition at 9 o’clock from NBC’s Kraft Music Hall one-offs, or ABC’s Wednesday Night Movie (neither of which charted in the Nielsen Top Thirty), Medical Center handily won its time slot…but failed to rank in the Top Thirty, either, in this first go-around. That wouldn’t be the case next year, when it would catapult into the Nielsen Top Ten…for one time only. 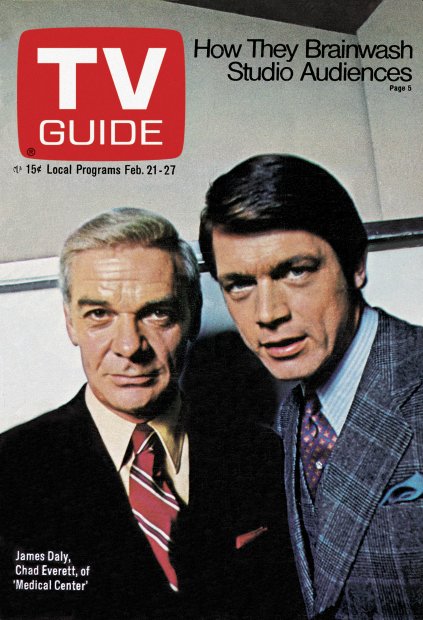 Since I never watched (& just purchased) the made-for-Sci-Fi Channel sequels, I revisited 1995's SPECIES. Fun times! Michael Madsen in top 90s tough-guy form; Marg Helgenberger scientifically testing crime scene materials 5 years before doing it on CSI; Alfred Molina a decade before he was Doc Ock; 15-year-old Michelle Williams, 3 years before Dawson's Creek; Forest Whitaker (cuz he was in EVERYthing); & Ben Kingsley as Xavier, the leader of this ragged X-Men-style group. But me & the college roomies were 19 at the time I originally saw this. Would we have been as interested if newcomer Natasha Henstridge wasn't the main attraction? 😳 One of my oldest Blu-rays, this is a 2006 pressing from Sony. Still fun to watch.
#OTD in 1953, Portland Wrestling premiered on TV. I stumbled across a DVD recently, PORTLAND WRESTLING SERIES VOL. 1, which featured some childhood faves, mainly Roddy Piper, Billy Jack Haynes & Rip Oliver. Check out my review at DrunkTV.net!
Bruce Willis, Problem Child, Van Damme, Sonic - a look at new & upcoming physical media releases from @MillCreekEnt! Link to watch in description.
Subtitles, axe murders, idiot 80s teens: some thoughts on 1989's GRAVE ROBBERS (Ladrones De Tumbas), released on Blu-ray by @vinegarsyndome. (Video link in description)
My @classicpopmag subscriber copy arrived today. Have you listened to the new @garynuman album?
Finally got around to watching my Blu-ray of CUTTING CLASS (released in 1989, shot in 87-88) - Brad Pitt's first major role. But I watched it for Jill Schoelen, of course. More miracle work by @vinegarsyndrome. Includes a great new interview with Schoelen in the special features.