It’s holiday time again, and that means the kids are home and I’m home and I’m not getting any work done because they’re screaming idiots and that means I have to find something to put on TV so I can get some goddamn peace and quiet around this madhouse. So…where are the “spring break” kids videos? Because that’s what they’re on: “spring break.” Whatever the hell that is. When one of their friends with a similarly questioning mind had the temerity to ask the homeroom teacher if they weren’t all really going on “Easter break,” he was forcibly removed from his cubby (poor thing had scrabbled right in there when he heard the dogs) and was immediately transported to our local AFGDNC RedEdCam (that’s the Amazon/Facebook/Google/DNC Re-Education Camp). We wish little Timmy well.

Maybe, just maybe (for the sake of a good review hook, and because I got very little sleep last night)…a tiny little bit of this school “spring break” nonsense started way back with Charles M. Schulz’s 1974 TV special, It’s the Easter Beagle, Charlie Brown. Cute and funny at times, It’s the Easter Beagle, Charlie Brown, unlike Schulz’s masterpiece, A Charlie Brown Christmas, conveniently leaves out all the “messy” religious aspects of the holiday. Apparently some things changed between 1965 and 1974 with Schulz and CBS….

Combining the plotlines of It’s the Great Pumpkin, Charlie Brown and A Charlie Brown Thanksgiving, It’s the Easter Beagle, Charlie Brown juggles three tiny subplots: Peppermint Patty’s (voice of Linda Ercoli) efforts to dye some Easter eggs; Snoopy’s efforts to secure a dry home for Woodstock (both voiced by producer Bill Melendez); and Linus’ (voice of Stephen Shea) strident belief that the mythical “Easter Beagle” will come and bring eggs and candy and peace to the children of the world.

Peppermint Patty’s labors to get her eggs dyed are hampered by preternaturally weird pal Marcie (voice of Jimmy Ahrens), who can’t seem to understand that the eggs have to be boiled in their shells before coloring. Snoopy, after wringing out a soaking wet Woodstock (his pathetic little nest is offered no shelter in his pathetic little twig of a tree), decides to buy him a nice wooden bird house, one that Woodstock fantastically appoints in the very latest mid-seventies mod furnishings. And Linus convinces Sally Brown (voice of Lynn Mortensen) that the Easter Beagle will come on Easter morning.

By 1974, the whole Snoopy phenomenon was really peaking, and so it’s natural that Schulz and producers Bill Melendez and Lee Mendelson would want to focus most of It’s the Easter Beagle, Charlie Brown on Charlie Brown’s dog, and not on Charlie Brown. ‘Ol Chuck doesn’t have a lot to do here (except of course getting shafted at the end when Snoopy runs out of eggs), and even though I love Snoopy’s funny little antics, I miss the morose, moral anchor that is Charlie Brown in these TV specials.

And while a few scenes are quite cute and memorable (Snoopy peering into a sugar egg, visualizing himself dancing with Easter bunnies, is clever and sweet), it’s hard to say that It’s the Easter Beagle, Charlie Brown has much to do with what makes Easter, Easter. For Schulz’s A Charlie Brown Christmas, Schulz famously fought CBS, which didn’t want the cartoonist’s explicit religious references (particularly Linus’ final Bible quotation, conveying to Charlie Brown the true meaning of Christmas). 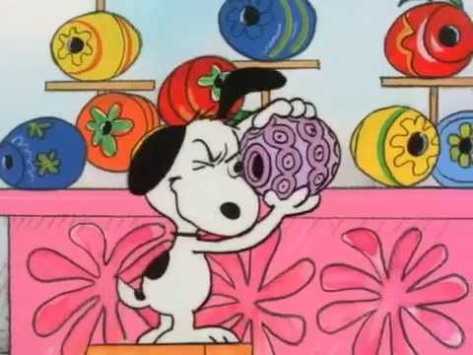 In the bonus documentary included on the Warner Bros. Blu-ray disc of It’s the Easter Beagle, Charlie Brown, commentators discuss Schulz’s motivations, both artistic and commercial, and their failed consensus accurately reflects this particular cartoon. Phil Cousineau implies that Schulz was knocking organized religion; however, nothing in It’s the Easter Beagle, Charlie Brown is religious. There’s a back-and-forth discussion as to whether Schulz intended deep, meaningful subtexts in his work, or if he was, as he himself often described it, just making “funny stories.” 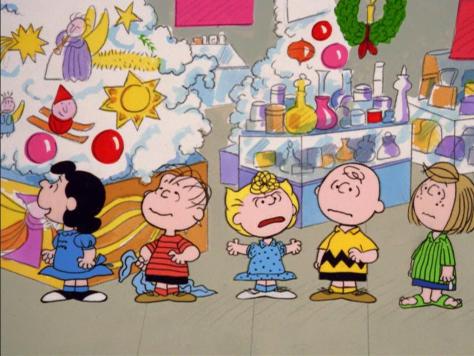 Producer Lee Mendelson is perhaps the most fair-minded, acknowledging that there’s definite contradiction in Schulz’s frequent disdain of commercialism (seen also in It’s the Easter Beagle, Charlie Brown), and his overwhelming success at, what else, commercializing the Peanuts characters. Ultimately, It’s the Easter Beagle, Charlie Brown suffers precisely because of its unresolved inconsistencies. It’s about Easter…but it denies any religiosity. It espouses anti-commercialism…but it was specifically made to get ratings and sell Dolly Madison treats. These contradictions result in a sweet, light, sometimes amusing Charlie Brown offering…but no more.