Not pulling any punches, 1975’s Be My Valentine, Charlie Brown successfully translates cartoonist Charles M. Schulz‘ conflicted feelings about love and romance within the standard Peanuts TV special framework. It took guts to put something out there that might make little kids sad—as well as giving the adults watching pause for thought.

With my subterranean DVD/Blu-ray vault filled to the top of its massive oaken beams with 1000s of hours of kid titles, I don’t pay too much attention to whether or not CBS airs the Charlie Brown TV specials anymore…because once they went to ABC, I quit watching with my kids (anyone else find they literally look different somehow on the Disney Channel ABC?). And yet, I saw in the trades that last week, Be My Valentine, Charlie Brown delivered yet again in the ratings, 44 years later, matching demos and audience numbers for dreck like Blindspot and Hell’s Kitchen (granted: nothing to brag about). Apparently, there are still vintage Peanuts TV specials fans—young and old—out there.

Click to purchase Be My Valentine, Charlie Brown at Amazon.

Having grown up with the Peanuts strip and the TV specials in the 1970s, there seemed to be a core three or four titles that aired repeatedly on network TV that I paid attention to…and that was it. The major holidays—Christmas, Halloween, Thanksgiving, and Easter—stuck in my head, but titles like Be My Valentine, Charlie Brown? Nope. Back in my day (get the tranquilizer dart: Gramps got out again), the Peanuts specials were really something to look forward to on TV…and you had one shot a year at catching them. No repeats until next year, no video recording, and certainly no at-will streaming. They were prime time “event” programming for kids who mostly had to watch what the grownups were watching on the tube. 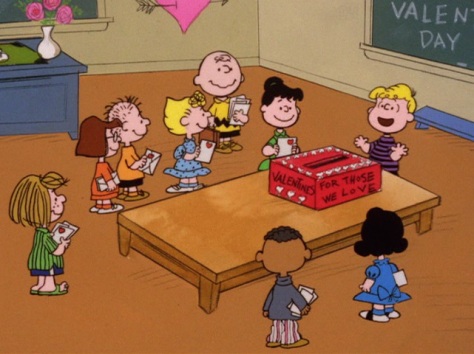 A strip that had invited critical and even scholarly studies for much of its run, Charles M. Schulz’s seminal Peanuts—often cited as the first comic to deal first and foremost with people’s emotions—will probably remain a source of critical and historical reappraisal and reevaluation from pop culture writers and comic historians, for the foreseeable future.

While I suspect most casual viewers won’t care in the slightest to view the Peanuts gang in such a serious manner (and they’re right), it is remarkable, after watching the engaging Be My Valentine, Charlie Brown, how unusual the best of these animated TV shorts were, in comparison to most standard animated TV kiddie fare at the time. There’s real, true depth of emotion explored in Be My Valentine, Charlie Brown, a nagging, persistent contemplation of the human spirit—with a decidedly adult, and arguably negative—viewpoint that lies beneath the surface of this deceptively simple “kiddie cartoon.”

If you’ve seen it before, you know Be My Valentine, Charlie Brown concerns the long-standing running gag in Schulz’ strip that had Charlie Brown not only pining for the “Little Red-Haired Girl,” but also lamenting the fact that he never received a Valentine in the mail. The animated short takes this basic story element, and expands it to show all of the Peanuts gang suffering from one sort or another of romantic longing (that largely remains unfulfilled). 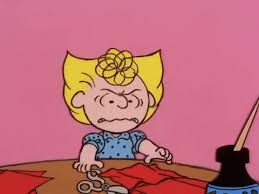 Charlie Brown suffers the worst humiliation; he doesn’t receive one single Valentine at school. Linus longs to give his teacher, Miss Othmar, a box of chocolates, but Linus sees her running out of the school to meet her boyfriend (Linus, betrayed, goes to an isolated bridge where he angrily throws the chocolates one by one off the bridge, as he curses love). Lucy, ever blind to Schroeder’s indifference to her entreaties of love, goes so far as to smash his toy piano in frustration (Schroeder, cold and unmoved by her passionate anger, calmly goes to the closet and gets another from a stack). Even Sally is disappointed in love, when she discovers that Linus bought his big box of chocolates for his teacher, and not her.

For a seemingly light-hearted Charlie Brown TV special, Be My Valentine, Charlie Brown is a rather remarkable downer…and totally in keeping with Schulz’ conflicted-at-best world view. Snoopy pops up to lighten the mood, but there’s no getting around the fact that Charlie Brown truly suffers here, from the humiliation of waiting and waiting by his mailbox for a Valentine, to his crushing embarrassment at not getting a Valentine in school (how pathetic is it when he asks Linus if maybe there was a mistake?).

Charlie Brown can’t catch a break with something as a small and insignificant as his candy heart: it reads, “Forget it, kid.” Even the finale, where Schroeder (uncharacteristically emotional) berates the others for pitying Charlie Brown by bringing him erased Valentines the next day (with his name penciled in), has Charlie Brown stopping him and saying, “I’ll take it!” Such is the state of love in the Peanuts world that Charlie Brown is glad to get any crumb of affection he can. Even in the form of pity.

That melancholy atmosphere evidently hit home when Be My Valentine, Charlie Brown was first premiered back in 1975; kids all over America sent in Valentines to Charlie Brown, telling him how sorry they felt for him (fat chance that happens today…). You have to hand it to Charles M. Schulz for coming up with a TV Valentine special for kids that winds up making them feel sad about love.

One thought on “‘Be My Valentine, Charlie Brown’ (1975): Emotional & engaging, one of the best Peanuts specials”

Today's arrival from @shoutfactory: the 1978 TV film, DR. STRANGE.
Fun in the sun with MAGNUM PI: THE COMPLETE SERIES on Blu-ray! Happy to see @millcreekent keeping the physical media flame burning for vintage TV. Link to unboxing in bio.
A little unboxing of a sealed 1983 Galaxian cartridge for the Atari 2600. I purchased it 15-20 years ago on Ebay. Link to video in description.
Took in a little artificial revenge with STEEL AND LACE (1991), video store-era fun released on Blu-ray by @vinegarsyndrome.
I legit chuckled my way thru 1989's THE LAUGHING DEAD - as it should be! Another nice Blu-ray restoration from @vinegarsyndrome. I talk about it in my video (link in bio).
A lil Chuck Norris in my most recent video (link in bio). BREAKER! BREAKER! (1977) is a fun ride through the rural, truck-drivin', CB-talkin' late 70s!