Okay…are we friends again? I know the Hart to Hart fans are a loyal group, and they can be…forceful, shall we say, in their displeasure with someone slagging off their favorite duo, no matter what project Jonathan and Jennifer are involved in (they’re still nicer than those Shirley Temple goons). Now, I didn’t like the fourth Hart to Hart TV reunion movie, Old Friends Never Die, but Hart to Hart: Secrets of the Hart, with the Harts dodging bullets in romantic Frisco, is a socko return to form as Mill Creek Entertainment releases all eight Hart to Hart reunion movies in a new DVD collection.

Hart to Hart: Secrets of the Hart, the fifth Hart to Hart reunion movie, first broadcast in March, 1995 and starring Stefanie Powers and Robert Wagner (with a sad, final appearance by Lionel Stander), sports absolutely first-rate location work, matched by an excellent supporting cast and a snappy mystery, making it one of the best of the Hart telemovie series.

Click to order Hart to Hart – Movies Are Murder Collection at Amazon.

In his hometown of San Francisco for a charity auction (watch out for those needles and sh*tpiles, Jonathan!), multi-millionaire industrialist and dabbler sleuth Jonathan Hart (Robert Wagner) opts to bid on an antique gold heart-shaped locket for his gorgeous wife, Jennifer (Stefanie Powers), who believe me, likes the expensive gifts. Inside the locket, however, Jonathan discovers a picture of none other than himself as a boy…with a picture of a little girl on the other half.

An orphan who never knew his family, Jonathan is intrigued, to say the least, with this development, but he treads cautiously when he finally tracks down his long-lost aunt, Frisco tour guide Maureen Collier (Marion Ross), and her nephew, Stuart Morris (Jason Bateman), a slick, hustling, fast-talking caterer who wants to climb up into the big leagues of Frisco society. Complicating matters is a heist of gold doubloons hauled up by Captain Jeremy (John Beck), employed by one of Jonathan’s scientific foundations, with thieves Sarah and Evan Powell (Wendie Malick and Michael Parks) hot on the Harts’ trail to tie up all the loose ends.

Written by Rob Gilmer (TV work like Magnum, P.I., Knight Rider, and Scarecrow and Mrs. King), and directed by Kevin Connor (lots of childhood drive-in favorites of mine like From Beyond the Grave, The Land That Time Forgot, At the Earth’s Core, Motel Hell, The House Where Evil Dwells), Hart to Hart: Secrets of the Hart is a super-smooth entry in the reunion series. If you’re a fan of the original series, you can pretty much guess that the producers (which include the two lead stars), aren’t going to mess around with Jonathan’s origin story. So, the mystery isn’t whether or not Marion Ross is Jonathan’s sister, but rather who’s behind the scam and why. 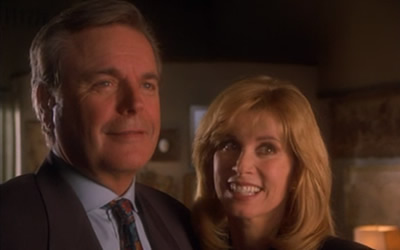 To screenwriter Gilmer’s credit, he keeps the proceedings nicely tangled, so we can’t quite get a handle on who’s dirty and who’s clean. Even better is director Connor’s absolutely first-rate use of the San Francisco locales (back when you could actually visit the place). Cinematographer Douglas Milsome gives Hart to Hart: Secrets of the Hart a big-screen, dreamy look that, thankfully, mostly avoids the clichéd Frisco haunts: no Fisherman’s Wharf here (there’s a wonderful shot of Wagner and Powers walking under umbrellas on a dark, rainy afternoon that perfectly captures how romantic Frisco can seem on a day like that…if it was twenty years ago). Director Connor keeps everything light and brisk, moving effortlessly from inconsequential scene to inconsequential scene: it’s the perfect recipe for escapist TV fare.

Obviously, Powers and Wagner are great together, as expected, but this time out, they have a hefty back-up cast adding a lot of the fun. Fast-talking Jason Bateman, injecting some much needed youthful energy into the Hart reunion formula, is perfectly cast as the slick, smarmily ingratiating hustler who can’t keep his mouth shut. Marion Ross is exactly the kind of warm, friendly sister you’d want to newly discover, while smooth pros Pat Morita and Edward Mulhare both have funny little cameos (not sure what someone like John Beck, though, is doing here in a nothing role. Things must have been tough for the ‘ol Swooper…). 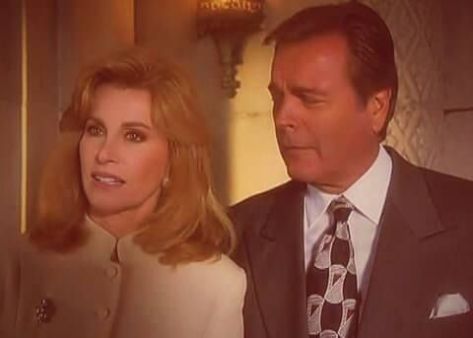 Real-life step-daughter Natasha Gregson Wagner is cute and charming, too, in a small role (the shadow of her mother’s face hauntingly appears whenever the lighting is right), while Michael Parks pretty much steals the whole show as a gum-chewing strong arm who’s not too bright, with Wendie Malick offering good contrast as his snotty, exasperated foil (when Parks’ gum falls out of his mouth in one scene, I hit the floor laughing―too bad they didn’t let him put it back in, to top the gag). And watch for Donald Trump in a very funny bit right at the tail end of the show (he’s hilarious, as always. You remember him, don’t you? He used to be beloved by Hollywood phonies who sucked up to him for money and reflected fame. He’s our President now…). As for the great Lionel Stander, there’s not much to say for his final screen appearance. Obviously ill, he isn’t given much to do here. His loss would leave a hole in the franchise that would prove impossible to fill.

One thought on “‘Hart to Hart: Secrets of the Hart’ (1995): A snappy mystery, one of the best Hart reunions”