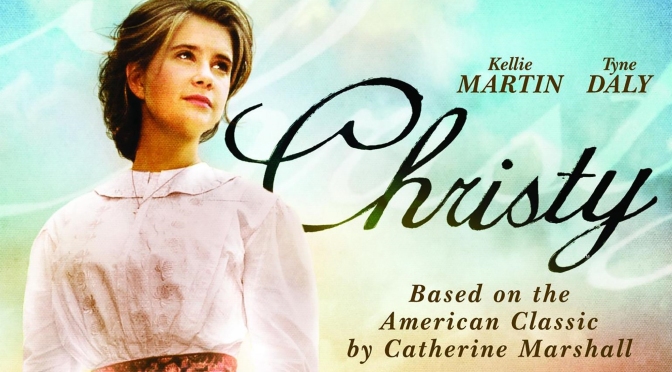 I was aware of Christy when it originally aired on CBS back in 1994, but I never tuned in.

Not knowing too much about the series, I did read several stories back then about fans and family groups who lamented its failure in the ratings, and its inevitable cancellation after a little more than one season’s worth of episodes (spread out over two half-seasons). Watching it today, I was surprised at how much I enjoyed it. Rather like a grittier The Waltons, Christy may often play like a romance novel, but at its core, it has a love and respect for a long- ignored and lampooned people—the so-called “hillbillies” of Appalachia—and returns a modicum of respect back to these misunderstood and unfairly maligned people.

Are you enjoying the content we’ve produced for the past half-decade? If so, consider supporting us by becoming a Patron at our Patreon page. Can you afford $1 a month? Well then, click over and check it out! The more support we get, the more content we can churn out for you! Click here to support us.

Click to order Christy: The Complete Series at Amazon.

Christy is based on the 1967 novel Christy, written by Catherine Marshall, the widow of Senate Chaplain Peter Marshall (who was immortalized by Richard Todd in the 1955 feature film, A Man Called Peter). That novel, inspired by Marshall’s mother’s adventures in the mountains of Tennessee, told the story of Christy Huddleston, a young woman who goes to Tennessee to help teach the impoverished children of the “highlanders.” The television series takes place in 1912 Tennessee. Christy (Kellie Martin), inspired by a visit from Miss Alice Henderson (Tyne Daly), packs up and goes to Miss Alice’s Quaker missionary located in the fictional village of Cutter Gap. There, the naive but strong-willed Christy sees first hand the stunning beauty of the Smokey Mountains—and the abject poverty and relative ignorance and superstition of the farmers and miners who work there.

Attracted to Reverend David Grantland (Randall Batinkoff), the minister who built the church and who runs the mission with Miss Alice, Christy meets obstacle after obstacle in trying to bring education and enlightenment to this isolated community. A lack of even the most basic school materials, the abject poverty of the schoolchildren who come to class barefooted (they don’t have money for shoes), dirty, sleepy (from hard sun-up to sun-down labor), and hungry (not enough money to buy enough food), the deadly feuds that still rage between families, the unfinished church where she holds classes, as well as the superstitions and cultural mores of the insular community (women don’t exactly have a lot of say around there), all conspire to make Christy’s first few days and weeks miserable. Almost quitting, she finds the inspirational strength and moral courage to continue on at Cutter Gap—with the help of handsome Rev. Grantland, as well as the handsome, mysterious Dr. Neil MacNeill (Stewart Finlay-McLennan), the gifted, educated “hillbilly” (his words) who returned to the mountain after his medical training, to help his community.

Granting further encouragement to Christy to stay with them are the various children who touch Christy’s heart, including Mountie O’Teale (Alyssa Hmielewski), a beautiful little girl who refuses to talk, and Little Burl Allen (Andy Nichols), a little charmer who captures Christy’s heart. Providing adult friendship, as well as inspiration through her own pluck and determination, is Fairlight Spencer (Tess Harper), a local woman who takes to Christy and understands what it means to have someone like her in the community.

What struck me about Christy, despite a tendency to romanticize some of Christy’s exploits, was the basic seriousness of the show, particularly in showing the poverty of the Appalachian children, and the incredible hardships that they endured (and still do). As I’ve written before, the shameful icon of the backwoods, ignorant, often-times vicious “hillbilly” is perhaps the most easily accepted harmful stereotype in the American pop culture. Hillbillies have been the subject of derision and ridicule in fiction and movies since movies began. And it continues today (now…you don’t even have to be from the South, or from the hills. You just have to be you to be attacked and maligned, in the media, at work, and at school).

That’s why Christy is such a breath of fresh air. It doesn’t skirt the drawbacks of the “highlander” culture; much of the show’s drama comes from the tension between Christy’s idealism and the brutal realities of the “highlanders” and their way of life. But it also returns to that culture the dignity and respect these hard working people deserve. Pioneers from Scotland, England, Ireland, and Germany, these incredibly brave, hardworking and stoic people settled the land that we live on now, farmed our food, and dug the coal (while dying like flies) that lit our cities, with zero thanks or appreciation from the dominant culture that belittled them. Christy has the guts to show these people in their proper light.

Not that Christy plays like a sociology lesson all the time, though. Often, Christy does rather resemble those romance novels with a headstrong female heroine who must choose between two iconic male fantasy figures: the mysterious, slightly dangerous man of education who balances cultural sophistication against his more common background, and the handsome, innocent young man of spiritual goodness and romantic idealism. But unlike those romance novels, there’s nothing at all untoward or salacious in Christy (have you ever looked through one of today’s romance novels? They’re porn-tacular). This is a family show, through and through, and all the more welcome for it. It’s nice, also, to see a network series that has two such strong women characters at the helm of the show; I would imagine quite a few parents with daughters would welcome a show that has these kinds of positive role models for their young girls (my youngest daughter took to the show right away).

But special mention must go to Tyne Daly as Miss Alice Henderson. I think the last time I saw Tyne Daly was at the drive-in, co-starring in the biker flick Angel Unchained with Don Stroud. I’ve never really followed her career, and I stayed away from Cagney & Lacey like the plague (until I was forced to review it back at that verkakte DVD Walk-Away). But Daly is fantastic as the strong-minded, spiritual, yet tough-as-nails Quaker Alice. Often times effortlessly running a gambit of emotions across her face within a single shot, Daly is really quite amazing here (I’m not surprised she won an Emmy for her role). She’s clearly the anchor for the series, and I’m not too sure how Christy would play without her.

When the pilot for Christy and 5 subsequent episodes were shown in April, 1994, they did well enough in their Wednesday 8pm timeslot (against a rising Mad About You and 18th-rated Wings over on NBC), for CBS to put in a 13 episode order for Christy to return the following season. However, only a Thanksgiving special aired in November, before CBS burned off the remaining episodes in April again; clearly, the network had given up on the show (there were quite a few stories out at that time from family groups lamenting yet another failed network family drama). What’s remarkable, though, is how tenacious the fanbase for these 21 episodes has remained over the last 25+ years. On second thought, though…it’s not surprising at all.