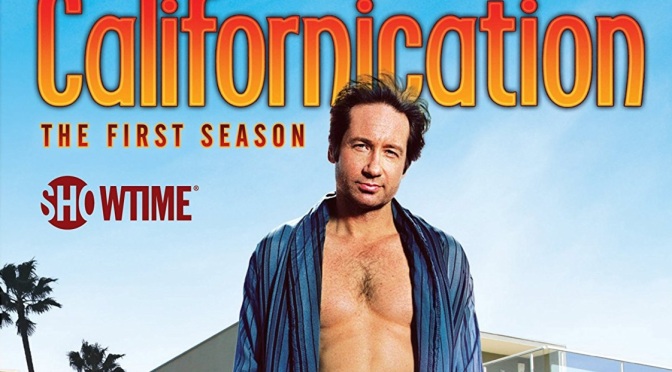 A guilty pleasure that leaves you wanting more than the less-than-30-minute run time of the episodes. Then again, that could be what makes it work.

Showtime’s Californication wallows in self-loathing, pity and debauchery, but because we all do the same, it’s fun to watch!

Click to order Californication: The First Season at Amazon.

David Duchovny stars as Hank Moody, a down-and-out novelist with one (aging) hit under his belt, living it up (down?) in Los Angeles where his ex-girlfriend and 12-year-old daughter live, and pining away for the day he can move back to New York, preferably with his ex back by his side.

Los Angeles, 2007. Author Hank Moody leers around acting … how else? Moody. He’s a blockbuster author whose breakout novel was turned into a watered down Hollywood movie. But that’s not his biggest concern; he’s struggling with writer’s block. He can’t produce new words, and he’s depressed after his ex-wife and daughter moved in with Bill, her new beau who eventually becomes her fiancé.

That general setup serves as the backdrop for Californication, but it’s the execution of Hank’s fun-loving, I-don’t-give-damn lifestyle that kept viewers flocking back to Showtime during the show’s 12-episode first season in 2007.

Defining the debauchery of Hank’s boozing and doping is Mia, Bill’s 16-year-old daughter, with whom Hank kicks off the season with a romp in the sheets, oblivious to her age. This puts Hank in the middle of an awkward triangle with Karen, Mia, and Mia’s father, Bill (Karen’s fiancé). (Triangle? Or is that a square?) This sets into motion a season-long arc concerning just how Hank will deal with the Lolita’s flirtations while keeping Karen and Bill in the dark.

But it’s Karen who he truly loves and wants. Played by Natascha McElhone, I sometimes catch myself wondering why Hank is so into her. Except that they share a daughter, she doesn’t seem Hank’s type. On the other hand, I can’t see what Karen sees in new boyfriend Bill, a publisher with a boring, dry personality.

The interplay between Hank, Karen and Bill is interesting and strange. Hank just pops in at Bill’s place at will to visit 12-year-old Rebecca and flirt with Karen, which often ends with a shared kiss. For someone who supposedly deplores her ex, Karen sure doesn’t mind frolicking with Hank under Bill’s roof.

Underneath the adult drama, Rebecca deals with subplots of her own, acting more adult than either of her parents. An aspiring musician, Becca knows her father means well and dreams her parents will one day be together again.

Adding flair and comedy to the proceedings is Charlie, Hank’s agent and best friend. Charlie is also having marital woes; his casual philandering with his secretary eventually backfires on him when his wife, Marcie, winds up exhibiting the same wild behavior Hank has reached out for in others (namely his secretary).

But Charlie’s a good wing man for Hank, and vise versa. They both wind up bailing each other out of embarrassing situations. What are friends for?

There’s something to be said about the 30-minute run time of Californication. Other series could benefit from a trimmed run time like this, and it works expertly here. As a drama/comedy that doesn’t feel like “dramedy,” as it’s so often defined, this is a show that could have been an hour-long drama, but the shorter format allows it to get to the point and deliver the (often dirty, but hilarious) goods.

Californication was never a huge hit in the ratings, often lagging far behind Dexter, Showtime’s critical and viewer hit at the time. But the ratings stayed consistent, and core viewers hung around long enough for Showtime pick it up for a second season.

Continual growth eventually led to a 7-season run for the show, which turned out to be a new a hit for former X-Files heartthrob Duchovny.

Prudes and moralists need not apply, but the rest of us can check out season 1 of Californication and enjoy watching adult failings that we’ve all, perhaps, experienced in our own lives.

Californication: The First Season was released on DVD by CBS in 2008.

Need your Friday the 13th fix? Check out 13 FANBOY, a 2021 indie slasher just in time for Halloween from @deskpopentertainment, released on DVD by @millcreekent. Find my #YouTube review link in my bio. Written review at MoviesandDrinks.com
KNIGHT RIDER turns 40! On this day in 1982, Knight Rider premiered on NBC. In my latest video, a look at KR physical media, books & other items, along with some personal memories of my favorite childhood show! (Link to channel in bio)
Some new pick-ups from @vinegarsyndrome sharing space with my popcorn maker. Unboxing vid linked in bio.
Cash money for an Amazon return?? In my latest video, a few of my favorite stories from when my online orders of physical media went off the rails. (Link in bio.)
NEW YORK NINJA was released in 2021, but looks an awful lot like 1984. Great production by @vinegarsyndrome, with soundtrack by @voyag3rband. My YouTube review linked in description (& my written review can be found at moviesanddrinks.com
Today's arrival from @shoutfactory: the 1978 TV film, DR. STRANGE.