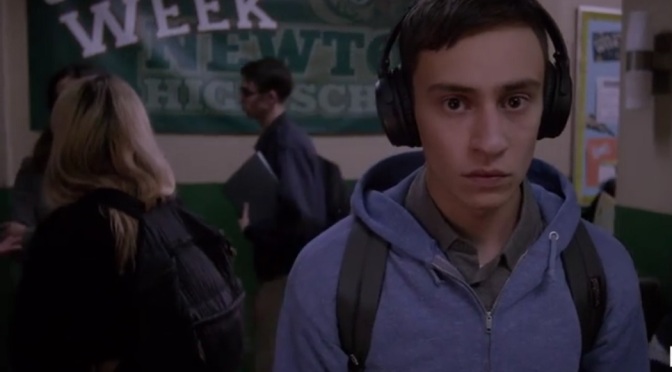 “Normal is overrated.” Ahhh, growing up. The awkward teen years.

It’s been a staple of TV for decades. The Wonder Years. Dawson’s Creek. Boy Meets World. Coming of age…that’s what it’s all about.

In Atypical, a new original Netflix streamer, the comedy gets shaded a little darker as producers Robia Rashid, Seth Gordon and Mary Rohlich craft a dramedy about an 18-year-old boy (played by Keir Gilchrist, United States of Tara) on the autism spectrum.

It looks like a mix of legit comedy (from the producers of The Goldbergs) and coming-of-age drama.

Gilchrist does a good job of looking like he’s 18 (he actually looks closer to 15 here), especially since he’s almost 25 years old. But hey, if those Beverly Hills, 90210 kids can play high schoolers in their thirties, why can’t he?

Atypical streams into homes via Netflix on August 11, 2017.

A little unboxing of a sealed 1983 Galaxian cartridge for the Atari 2600. I purchased it 15-20 years ago on Ebay. Link to video in description.
Took in a little artificial revenge with STEEL AND LACE (1991), video store-era fun released on Blu-ray by @vinegarsyndrome.
I legit chuckled my way thru 1989's THE LAUGHING DEAD - as it should be! Another nice Blu-ray restoration from @vinegarsyndrome. I talk about it in my video (link in bio).
A lil Chuck Norris in my most recent video (link in bio). BREAKER! BREAKER! (1977) is a fun ride through the rural, truck-drivin', CB-talkin' late 70s!
Watched THE SLAYER (1982) & enjoyed the ambiguous ghost story vibes mixed w/slashery feels. Released by @arrowvideo. Link in bio to my video review.
Had fun with the @arrowvideo Shocktober sale this year, & picked up more Blu-rays than anticipated. But I filled in a lot of missing gaps! Video link to the unboxing in description.