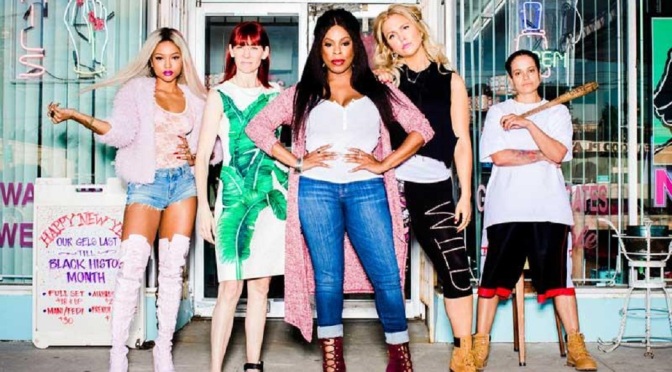 So you do nails professionally. Maybe hair too. But you’re bored. What do you do now?

TNT is premiering Claws on June 11, a comedy-drama starring Niecy Nash, Carrie Preston and Harold Perrineau. (Or is it drama-comedy? You can decide.)

According to the description, five manicurists at the Nail Artisan salon of Manatee County enter the traditionally male world of organized crime when they begin laundering money for a neighboring pain clinic.

This looks like a guilty pleasure to me, especially if you’re in any way involved in the world of hair and nails, and/or enjoy Real Housewives-type reality shows.

The new show, from Studio T and Warner Horizon Television, is slotted for 60 minutes, so it’ll be a filling time waster while you drink wine and wonder why you’re not spending more time (and money) on your nails.

According to the TNT website, Claws “is a midnight-dark, wickedly funny meditation on female badness set in a South Florida nail salon.”

KNIGHT RIDER turns 40! On this day in 1982, Knight Rider premiered on NBC. In my latest video, a look at KR physical media, books & other items, along with some personal memories of my favorite childhood show! (Link to channel in bio)
Some new pick-ups from @vinegarsyndrome sharing space with my popcorn maker. Unboxing vid linked in bio.
Cash money for an Amazon return?? In my latest video, a few of my favorite stories from when my online orders of physical media went off the rails. (Link in bio.)
NEW YORK NINJA was released in 2021, but looks an awful lot like 1984. Great production by @vinegarsyndrome, with soundtrack by @voyag3rband. My YouTube review linked in description (& my written review can be found at moviesanddrinks.com
Today's arrival from @shoutfactory: the 1978 TV film, DR. STRANGE.
Fun in the sun with MAGNUM PI: THE COMPLETE SERIES on Blu-ray! Happy to see @millcreekent keeping the physical media flame burning for vintage TV. Link to unboxing in bio.